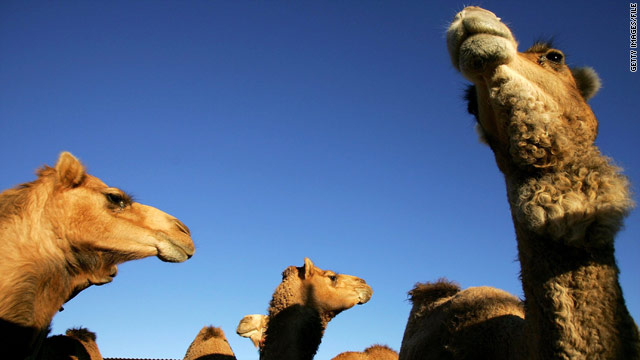 OK, so apparently Australia's interior desert is overrun with more than a million camels that nobody owns.

Furthermore, Australia is looking for ways to reduce its agricultural greenhouse gas emissions under something known as the Carbon Farming Initiative.

How are these facts related, you say? We're glad you asked.

It seems these feral camels are known to, well, emit a lot of greenhouse gases, if you get our meaning.

In response, an Australian entrepreneur has submitted a proposal to the initiative to improve the air down under by shooting the dromedaries where they stand.

Or, as a headline on the Australian blog The Register concisely put it: FARTING DEATH CAMELS MUST DIE.

Dr. Tim Moore, managing director of a company called Northwest Carbon, proposes "removal" of all of the methane-spewing ships of the desert.

The document defines "removal" as "an activity ... that causes the untimely demise of the feral animal (camel) through humane means."

Among those means are shooting the camels from helicopters and four-wheelers, and rounding them up for slaughter and use as food for humans and pets.

"The project abatement methodology meets the CFI requirements for additionality, permanence, avoidance of leakage, measureable and verifiable emissions reductions, conservative estimation of benefit, is consistent with international accounting procedures, and is well supported by peer-reviewed literature," the proposal states.

The document acknowledges that the helicopters, four-wheelers and abattoirs will burn fossil fuels in the process of culling the camels, which many Australians consider plant-trampling nuisances that compete with cattle herds and native species for pasture land.

Conservationists and animal rights activists are divided on the plan. While there's no question the non-native species wreaks havoc on the environment, vegans say cattle farms are far worse.

Dromedaries (single-humped camels) were imported to Australia in the 19th century from India, Pakistan and Afghanistan to help build roads and railroads, according to the Daily Mail.

Mark Dreyfus, parliamentary secretary for climate change, told the Daily Mail the government is taking the proposal under consideration.

"I'm confident the proposal, now before the government, will get the go-ahead," Moore told the Daily Mail. "We're a nation of innovators and we find innovative solutions to our challenges. This is just a classic example."