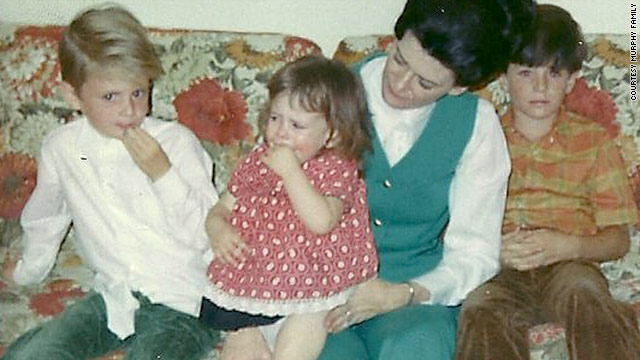 Overheard on CNN.com: Parents to blame for anti-'sissy' therapy?

"A tragedy. Parents having a child that didn't meet their and society's expectations. Parents who used an experimental treatment. A father who brutalized his son and a mother who let it happen. Reker? I can't say what I think. Won't get past the censors. But there is a special ring in Dante's inferno waiting for him."–abbydelabbey

Kirk Murphy committed suicide in 2003 at the age of 38, more than three decades after treatment to make him more "masculine." George Rekers, the doctoral student who treated him, went on to found a faith-based organization that lobbies against gay-rights issues. As recently as 2009, a book Rekers co-authored cited Murphy's case as a success. Murphy's family has a different story.

While most commenters were appalled at his treatment, many they said the parents were to blame. thies said, "The mom blames the doctor?! lol."

QueenMean said, "The parents do not get a pass on this. Beating their kid til he screams because they want him to be more boylike? Forcing his brother to become complicit in this? I don't care if God almighty comes down from the heavens, the parent is the final judge on what occurs in their home. They don't get to point to someone else and say 'he started it.' "

lajodi said, "This story is unbearable. My heart breaks for that boy and the man he grew into. I don't understand how any mother could allow her son to be hurt that way. The parents are just as responsible for what happened as the therapist."

Other readers said that it was unfair to judge earlier times by the standards today. JRKnowsBest said, "I am always shocked when I realize how much our society has changed in my lifetime. I lived through the kind of discipline that is being discussed here, and had forgotten how brutal it was. The story brought back memories that I hadn't thought about in years. Memories of my Dad chasing me around the garage with his belt. I think the humiliation of it was more disturbing than the pain that I felt. But the 70's were like that. That was normal parenting back then. Just 30+ years later, we're amazed, even those of us who lived through it."

SadieBoyd said, "The parents thought they were doing 'the right thing': after all, the doctors were the experts." unknown11 said, "While I in no way condone anyone's action in this case, I think I will assume that the parents actually had his best interrests at heart. Remember that in the '70s you would have been very worried about a gay child. You would be worried about his future and well being. I am not calling that a good reaction, but we all only operate on the information and societal norms that we have at the time."

kermit12 said, "Love your children as they are, or be prepared to bury them sooner or later. Goodness knows how many other 'experiments' have gone on. I know the Mormon church does 'anti-gay therapy' with electro-shock treatment included. A close friend of mine survived this; he is now a lost soul - an alcoholic/drug addict, incapable of having relationships."

Bruce5 said, "I too was beaten and tortured by my father because he correctly perceived that my love of art and music (which he considered effeminate) meant that I might become gay, and he was determined to beat it out of me. He did not succeed. This program brings anew the rage and fury over the premature death of that 'sissy boy' which was me."

CNN.com readers were mostly critical of the article's homeowners, who are not paying their mortgages while they try to negotiate loan modifications or fight evictions in court. TikiGawd, referring to one of the interviewees, said, "Sorry, 'Lynn,' but thinking of your home as a piggy bank is what got you in that situation." Ryan Furlong, said, "You sign up for an ARM, that's your own damn fault."

JJMurray said, "These are the kinds of people destroying this country. Absolutely no personal responsibility and no self respect. Everything is someone else's fault." TheNewWyatt said, "I like that Lynn's biggest problem is, not paying the mortgage, but if she should get another dog or not. Now there is a person who is plannig ahead."

Perhaps the old ways of thinking about things is wrong, suggested JimMNH: "Am I wrong for teaching my kids to do the right thing? My traditional perspective is that someone who signs a contract and weasels out of it is wrong. This is how I grew up and what I still believe. On the other hand, my enlightened perspective is that it is the banks and financial institutions and our own government that are the root of this issue. The banks and financial institutions were taking advantage of people before the roof caved in on their schemes. They fight the needed regulations and oversight to keep people and themselves honest and on a level playing field."

Raycote said, "The problem here is that corporate institutions have so completely captured the machinery of American democracy that the citizens have no ability to constrain or dictate any limits to their behavior. The corporate tail in now fully in control of the democratic dog it is was intended to serve."

Republican presidential candidate Newt Gingrich's campaign manager, press secretary, top strategists in New Hampshire and South Carolina, and six Iowa staff members resigned Thursday. According to Craig Schoenfeld, former Iowa executive director for Newt 2012, "there was a difference of opinion in how we saw a path to success and victory."

Josh said, This is a serious blow for Newt and the several other people who think he should be president."

Ace said, "His campaign staffers found out he'd been seeing another campaign staff . . ." jo an asked, "Did he tweet their wives????"

Wobbles said, "When everyone but your dog leaves your campaign you might want to reconsider how badly you really want to lose a primary." JadeRose said, "That'll do, Newt. That'll do."

HEY! said, "Well, things are going so smoothly already. If he can't even manage his own team, why should he be president? Rule 1: Compromise."

EYE OF NEWT said, "Many people were hoping Newt's campaign would collapse in complete humiliation just like this, because it's so much more entertaining than a slow fade to obscurity. Unfortunately, if his campaign collapses now, we will be denied the outrageous damage he'll do to himself, his family, and his party of the next year or so. I for one, hopes his ugly hypocrisy allows him to hang on for a while."

Do you feel your views align with these commenters' thoughts? Post a comment below or┬Āsound off on video.

Researchers from the Met Office and Osaka Metropolitan University say the climate crisis and urban warming have pusŌĆtwitter.com/i/web/status/1ŌĆ”wg
CNNweather

8:02 pm ET May 20, 2022 RETWEET
A tornado swept through the German city of Paderborn Friday, injuring at least 30 people, authorities said, and bleŌĆtwitter.com/i/web/status/1ŌĆ”Cj
CNNweather

7:32 pm ET May 20, 2022 RETWEET
Election day creates a carnival atmosphere at polling booths across Australia, but beneath the bonhomie lies a seriŌĆtwitter.com/i/web/status/1ŌĆ”lJ
cnni

7:32 pm ET May 20, 2022 RETWEET
Election day creates a carnival atmosphere at polling booths across Australia, but beneath the bonhomie lies a seriŌĆtwitter.com/i/web/status/1ŌĆ”lJ
cnni

6:33 pm ET May 20, 2022 RETWEET
Hillary Clinton personally approved her campaign's plans in fall 2016 to share information with a reporter about anŌĆtwitter.com/i/web/status/1ŌĆ”k1
cnni

6:22 pm ET May 20, 2022 RETWEET
After a botched launch in 2019, Boeing successfully test launched their Starliner spacecraft that it developed to tŌĆtwitter.com/i/web/status/1ŌĆ”9M
cnni