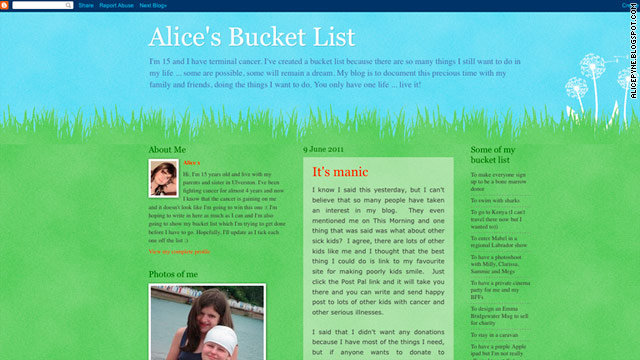 British teen Alice Pyne, who has cancer, has written a bucket list on her blog of things she'd like to do before she dies.
June 9th, 2011
12:40 PM ET

The online bucket list of a British teenager reportedly dying of cancer has made headlines around the globe and dominated Twitter for the past 24 hours.

"It doesn't look like I'm going to win this one. The cancer is spreading through my body," Alice Pyne's blog says. "It's hard because I gave it my all. And it's a pain because there's so much stuff I still want to do. Anyway, Mum always tells me that life is what we make of it."

The term "bucket list" refers to a list of things a person wants to do before he or she "kicks the bucket." According to British and Australian press reports, Pyne's list includes taking a tour of Cadbury World to eat "loads" of chocolate, having a movie nights with her best friends, going to Kenya and swimming with sharks.

She wants to enter her dog Mabel in a local Labrador show and meet the British pop group Take That.

A Michigan sheriff joined protesters on Saturday, putting down his weapon and saying, "I want to make this a paradeâ€twitter.com/i/web/status/1â€¦Kq
cnni

1:31 am ET June 6, 2020 RETWEET
"We can no longer use the flag to turn people away or distract them from the real issues that face our black communâ€twitter.com/i/web/status/1â€¦GG
cnni

1:01 am ET June 6, 2020 RETWEET
Laser mapping is increasing the speed and scale of archeological discoveries and has now revealed the earliest andâ€twitter.com/i/web/status/1â€¦Fp
cnni