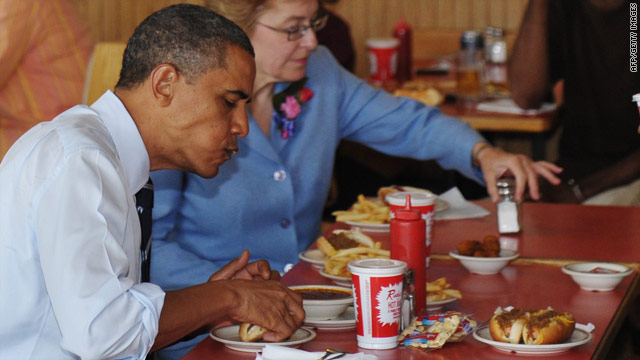 A tout from President Obama wasn't enough to keep a Toledo, Ohio, restaurant in business.

New Chet's Restaurant, which has been serving home-cooked meals since 1973, will close Sunday, a little more than a week after the president mentioned the eatery during an appearance at a nearby Chrysler Jeep plant.

Obama was in Toledo to talk about the success of the auto industry bailouts, which helped keep Chrysler in business.

"This plant indirectly supports hundreds of other jobs right here in Toledo. After all, without you, who'd eat at Chet's, or Inky's, or Rudy's," the president said last Friday.

The current level of business from the Jeep plant doesn't measure up to what it once was Chet's owner, Richard Lawrence, told CNN affiliate WTVG.

"When they were going full blast, it was wonderful, but when they opened, closed, and closed the shifts, it never came back. We used to deliver $500 a week in food, now $100," he said.

But another piece of government legislation may have been the biggest hit on Chet's business - a 2006 state law banning smoking in public places.

"With the smoking ban, that hurt us. I never realized how bad it hurt us. I thought we'd overcome it, but we never did," Lawrence told WTVG.

Chet's most recent banner business day came during Obama's visit as customers came in hoping to bump into the president, Lawrence told The Toledo Blade.

"It was busier than heck. Some people waited there for three hours. My parking lot was jammed," the paper quoted Lawrence as saying.

While customers got a good meal, they didn't get any time with Obama. The president also ate at Rudy's Hot Dog that day.