The US Justice Department has announced criminal charges against a member of Iran's Islamic Revolutionary Guard Cor‚Ätwitter.com/i/web/status/1‚Ä¶9y

US inflation took a breather in July, thanks to the falling cost of food and gas, as consumer prices grew at a slow‚Ätwitter.com/i/web/status/1‚Ä¶W7

Children living in London will be offered an extra dose of the polio vaccine following the discovery of poliovirus‚Ätwitter.com/i/web/status/1‚Ä¶ts

At its product launch event on Wednesday, Samsung will once again make the hard sell for foldable phones. Follow l‚Ätwitter.com/i/web/status/1‚Ä¶nl 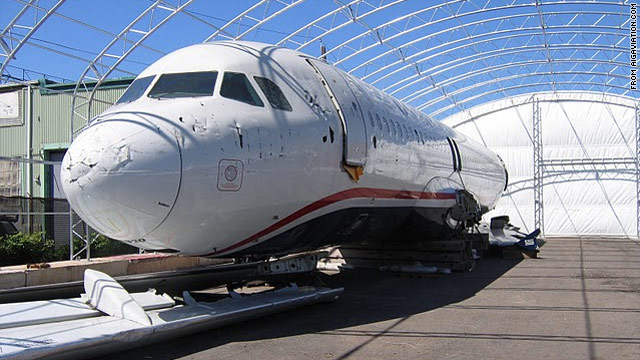 "Miracle on the Hudson" plane: The US Airways Airbus 320 that Capt. Chesley Sullenberger safely put down in the Hudson River in January 2009 arrives at its new home in Charlotte, North Carolina, on Friday.

The jetliner, minus its wings and tail section, was at a weigh station in Surry County, North Carolina, overnight before beginning the final leg of its journey from a warehouse in Harrison, New Jersey. It is expected to reach its new home at the Carolinas Aviation Museum in Charlotte between 11 a.m. and noon Friday, according to a museum Twitter posting.

Among those who got a chance to see the aircraft Thursday were two of the 155 passengers and crew aboard when Sullenberger set the Airbus down in the Hudson after its struck birds and lost power upon departing LaGuardia Airport on January 15, 2009, on a flight to Charlotte.

"This airplane crashing in the river and staying afloat for 23 or 24 minutes, long enough for us all to get off, is an amazing miracle." survivor Beth McHugh told the Greensboro TV station.

NASA says it will launch the Aquarius/SAC-D Sea Surface Salinity satellite from Vandenberg Air Force Base in California.

For the next three years, the Aquarius satellite will look back at Earth and generate monthly maps of sea salt movement, data that are crucial to the understanding of global climate change and ocean currents.

The project will give scientists the information they need to better predict El Nino and La Nina tropical climate patterns in the Pacific. Until now, such research has been limited to ship and buoy instrumentation.

The conference, with the theme ‚ÄúDefining Our Role in a Changing World,‚Äù features speakers including consumer advocate Ralph Nader, comedians Dean Obeidallah and Ahmed Ahmed, political and academic figures and a performance by the New York Arab Orchestra.

Topics up for discussion include the current "Arab Spring" uprisings in the Middle East and North Africa, U.S. foreign policy and Arab-American identity.

The organization says the conference is the country's largest gathering of Arab-Americans.

Thousands of hectares have been destroyed as a new fire rages in the Gironde area of southwestern France, barely tw‚Ätwitter.com/i/web/status/1‚Ä¶mI
CNNweather

8:25 am ET August 10, 2022 RETWEET
‚ÄúJames‚Äô office is considering whether to file a civil suit against Trump and his company and has said it has ‚Äúutwitter.com/i/web/status/1‚Ä¶0BQA05Pk
susancandiotti

China's leading #MeToo figure has lost her appeal in a sexual harassment case against a star TV host cnn.it/3PinPzA
cnni

4:00 am ET August 11, 2022 RETWEET
From the historic and atmospheric capital of Hanoi in the north, down to the sun-kissed tropical beaches of Ph√∫ Qu·ªtwitter.com/i/web/status/1‚Ä¶OrDF2
cnni

3:30 am ET August 11, 2022 RETWEET
And Disney+ isn‚Äôt the only Disney streaming service that‚Äôs going up in pricnn.it/3BUx32dKOZr
cnni

10:52 am ET August 10, 2022 RETWEET
US inflation took a breather in July, thanks to the falling cost of food and gas, as consumer prices grew at a slow‚Ätwitter.com/i/web/status/1‚Ä¶W7
cnnbrk

8:59 am ET August 10, 2022 RETWEET
Children living in London will be offered an extra dose of the polio vaccine following the discovery of poliovirus‚Ätwitter.com/i/web/status/1‚Ä¶ts
cnnbrk