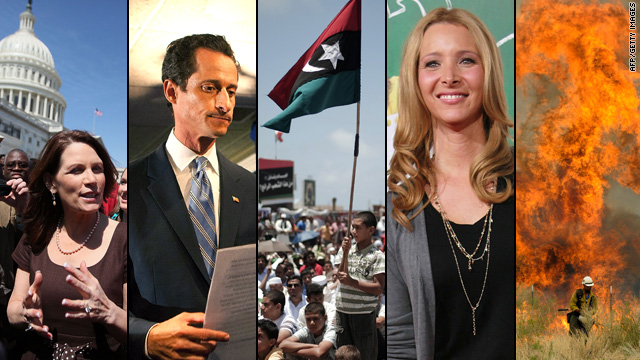 Eastern Arizona residents face serious health hazards as some of them return home days after a wildfire that continues to burn. Heavy smoke has permeated communities around the blaze, prompting New Mexico health and environment officials to issue warnings. Here's a look at this and some of the other stories we plan to follow this week:

As firefighters continue battling a massive wildfire in eastern Arizona, authorities expect thousands to return home after a mandatory evacuation order was lifted.

"After consulting with fire officials, it has been determined that the fire risk has diminished enough that it will no longer be a threat to the citizens of the towns," said Cmdr. Webb Hogle of the Apache County Sheriff's Office.

But he said smoke from the wildfire "still poses serious health hazards" in Springerville, Eagar and South Fork. "If they return, they do so at their own risk," he added.

The fire broke out May 29 in the Apache National Forest and was less than 6% controlled, fire officials said over the weekend.

ŌĆśWeinerGateŌĆÖ: Will he stay or will he go?

Calls for U.S. Rep. Anthony Weiner to leave office are expected to intensify this week as more revelations about the sexting and explicit photos scandal come to light: On Sunday, TMZ published photos of Weiner in various states of undress that he apparently took of himself in a locker room.

Will Texas Rep. Ron PaulŌĆÖs third bid for the White House be the charm? Can Michele Bachmann rise above the ranks?┬ĀWith the 2012 election a little less than a year and a half away, there are still prominent Republicans who have yet to make a decision on whether they'll make a run for the White House but other contenders have been running for months.

Check out the Webby Awards

The Webby Awards ceremony will be held Monday at the Hammerstein Ballroom in New York. It will be up to host Lisa Kudrow to keep the winners within the awardsŌĆÖ patented five-word acceptance speech (Example: ŌĆ£Hey, is this thing on?ŌĆØ).

Now in its 15th year, the Webbys are the Internet's most widely recognized honors for websites, online music and videos, mobile technology and interactive advertising.

CNN, which was nominated in five categories, won in the video remixes/mashups category with "Walk Around the World," an interactive feature in which CNN.com asked readers to share a one-minute video of themselves walking.

NATO said in a statement Sunday that anti-Gadhafi sentiment "is increasing in Libya as a growing number of Libyans demand the right to choose their own future." Citizens were openly challenging Col. Moammar Gadhafi's legitimacy along the nation's northwest coast between Tripoli and the Tunisian border, it said.

In Syria, an end to the bloodshed was nowhere in sight as┬ĀSyrian forces surged into a northwestern city Sunday.

In Bahrain, protests in the small, strategically important Gulf kingdom were expected to continue┬Āas part of the Arab Spring demonstrations.

At least two former Bahraini opposition lawmakers went on trial Sunday, as a military court sentenced a 20-year-old poet to a year in prison.

A mass demonstration on Puerto Rico's status┬Ā is planned for Tuesday┬Ā when President Barack Obama visits the U.S. commonwealth.

Nonetheless, Puerto Rico Gov. Luis G. Fortu├▒o, in┬Āa statement released in May, expressed gratitude for the presidential visit. ┬Ā"Since the beginning of my administration, we have been working in close collaboration with the president and his administration to make this historic visit a reality," said Fortu├▒o.

The rally, by the June 14th Coordinating Committee, is to take place in San Juan.

Full Pentagon Papers to be released

On Monday, the federal government will release in full the Pentagon Papers,┬Āthe secret government study of the Vietnam War.

While redacted and edited versions of the papers have been published before, most notably in The New York Times and other newspapers, this will be the first time the documents see the light of day in their complete form.

In 1971, ┬ĀDaniel Ellsberg, a former Pentagon official, leaked the papers, officially titled "United States-Viet Nam Relations, 1945-1967: A Study Prepared by the Department of Defense," revealing that the government had lied to Congress and the American public about the progress of the war.

Protests expected in release of officer in BART shooting

A former transit police officer convicted last year in the shooting death of an unarmed man on an Oakland, California, train platform will be freed from prison early Monday, according to a court order.

Johannes Mehserle was sentenced to two years in prison for the involuntary manslaughter death of 22-year-old Oscar Grant on New Year's Day 2009, but Mehserle will be released early. Technically he could be free to walk out of prison just after midnight Sunday,┬ĀLos Angeles Superior Court Robert Perry said in an order signed Friday.

Business owners are boarding up stores in Oakland in anticipation of riots linked to Mehserle's early release from jail, according to CNN affiliate KTVU.

RT @BurkeCNN: Andrew Yang was criticized after a video of him wearing a robe and singing with a black choir went viral. Here's what reallyŌĆ”
CNNBelief

1:02 pm ET January 25, 2020 RETWEET
A church made headlines for allegedly asking older members to leave. But the reality is more complicated cnn.com/2020/01/22/us/ŌĆ”
CNNBelief

9:13 pm ET January 22, 2020 RETWEET
The Supreme Court today will consider a dispute that could open the door to more state funds going toward religiousŌĆtwitter.com/i/web/status/1ŌĆ”ug
CNNBelief