The White House releases its plans to roll out Covid-19 vaccines for children ages 5 to 11, pending FDA authorizatiŌĆtwitter.com/i/web/status/1ŌĆ”GX 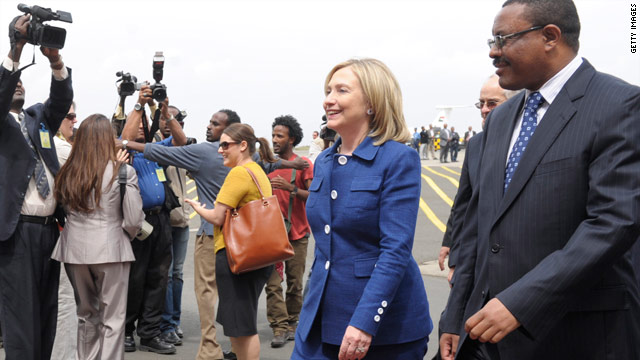 Secretary of State Hillary Clinton, seen in Addis Ababa, Ethiopia, made the remarks during part of an official five-day day visit to Africa.
June 13th, 2011
11:35 AM ET

Clinton made the remarks at a meeting of the African Union in Addis Ababa, Ethiopia.

She urged countries to "suspend the operations of Gadhafi's embassies in your countries," expel pro-Gadhafi diplomats and "increase contact and support" with the Transitional National Council, which represents the main opposition to Gadhafi's rule.

A handful of countries have recognized the Transitional National Council as the sole representative of the Libyan people. A larger number have agreed to provide it financial support.

We have emitted so much CO2 into the atmosphere that people have built giant fans to suck it back out, in the hopeŌĆtwitter.com/i/web/status/1ŌĆ”yU
cnni

8:20 am ET October 20, 2021 RETWEET
Two former German soldiers have been arrested on suspicion of attempting to create a paramilitary unit to fight inŌĆtwitter.com/i/web/status/1ŌĆ”2H
cnni

7:55 am ET October 20, 2021 RETWEET
At least 14 people have been killed and three others injured after a Syrian military bus was targeted with two explŌĆtwitter.com/i/web/status/1ŌĆ”Up
cnni