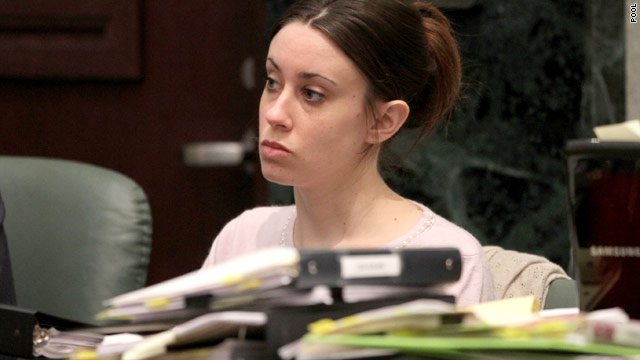 Adhesive in the shape of a heart was found on a corner of a piece of duct tape that was covering the mouth portion of 2-year-old Caylee Anthony's skeletal remains, an FBI latent print examiner testified Monday in the capital murder trial of the girl's mother, Casey Anthony.

Elizabeth Fontaine explained the find to jurors by asking them to think about when they remove an adhesive bandage from their skin and some of the adhesive remains in the shape of the bandage. Instead of a bandage, however, the outline was the shape of a heart, she said, and about the size of a dime.

Although it has not been mentioned in testimony, court documents in the case have stated that a sheet of heart-shaped stickers with some missing were found by police executing a search warrant at the Anthony home. A photograph of a page of stickers, found in a search of the home the day after Caylee's remains were found, was admitted into evidence in the trial Saturday.

A line of investigators and forensic experts have been called to the stand by prosecutors in an effort to prove their theory that Anthony, 25, killed her daughter by knocking her out with chloroform and putting duct tape over her nose and mouth. They allege the Orlando woman then put the body in black garbage bags and stored it in her trunk before dumping it in woods near her home. The skeletal remains were found in December 11, 2008. Caylee was last seen June 16, 2008, but her disappearance was not reported until July 15, 2008, after Anthony's mother demanded answers about the little girl's whereabouts.

Anthony faces seven counts in her daughter's death, including first-degree murder, aggravated child abuse and misleading investigators. If convicted, she could face the death penalty.Â  She has pleaded not guilty. Her attorneys have said Caylee was not killed but rather that she drowned in the family pool shortly after her family last reported seeing her and that Anthony and her father, George Anthony, panicked when they discovered the body and covered up her death. George Anthony rejected that scenario in his testimony the first week of the trial.

The trial is ahead of schedule, Orange County, Florida, Chief Judge Belvin Perry Jr. told jurors as they took a break for lunch. Prosecutors have one more witness to present, who will not be available until Tuesday afternoon, they said. The defense anticipated beginning its case Thursday but is trying to accelerate that process and begin Wednesday, the judge said.

Debbie Blount is, for the most part, your average college undergrad â€” with piles of homework and a packed after-schtwitter.com/i/web/status/1â€¦5p59
cnni

3:56 pm ET October 15, 2021 RETWEET
Rising sea levels are boosting the need for flood defenses, but structures by the shore can come at a cost to the mâ€twitter.com/i/web/status/1â€¦ui
cnni

3:45 pm ET October 15, 2021 RETWEET
COP26 is fast approaching and the whole world seems to be talking about the climate crisis -- but the terminology câ€twitter.com/i/web/status/1â€¦fj
cnni