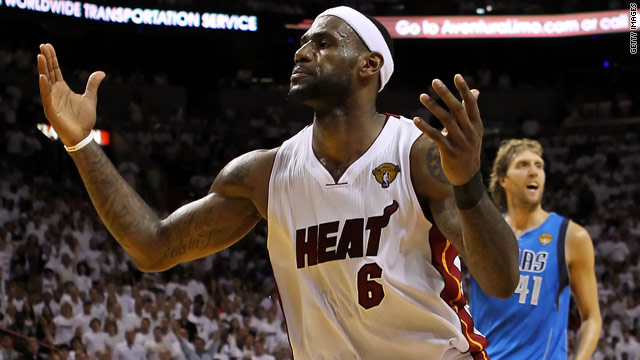 Overheard on CNN.com: To be great, James needs humility

“It's not about him leaving Cleveland: players do that all the time. It is the manner in which he left and the ego he took into this season that makes it satisfying to see him fail hard in the championship. Kinda like when the Giants took down the 18-0 Patriots.”–rob

Clevelanders laughing as LeBron loses; in Dallas, perseverance pays off

It seems that LeBron James broke the hearts of many Cleveland fans when he moved on to play basketball for the Miami Heat. So Clevelanders were a mite gratified when Miami lost to the Dallas Mavericks in Game 6 of the NBA Finals on Sunday night. Many CNN.com readers said the issue was sportsmanship and not ability.

deb said, “Sportswriters get it. Players get it. If you put self-promotion above the game, you are not going to be well liked. Character still counts. Humility still counts. Lebron could be great, but he needs to chill out, figure out how to play with a team as a team and put away the cult of personality. He is potentially one of the greatest, but you can destroy talent without discipline. In any event, Dallas and Dirk worked for it, and worked together to win. Beautiful.”

r-hope said, “It boils down to one thing: humility. And LeBron doesn't know how to spell that. After losing, he was too proud to even congratulate the Mavs; that is what you do in sports. You acknowledge that the winning team did a better job. The day Lebron will learn to win and not thump his chest about it, or gloat over those who lose, that will be the day he becomes a real star.”

Many readers said it was time for Cleveland fans to let go of the past and move on. Steph said, “Seriously, City of Cleveland, you need to get over LeBron leaving. I know you feel betrayed because he said he would never leave but really!”

Beth said, “James left–yes–but this was just business and nothing else. And look, he helped bring Miami this far. He could have done a lot worse; and he's young and has a long time ahead of him to win a championship. So get over it, Cleveland.”

Yasnel said, “Cleveland needs to man up and stop crying. It's cold and disgusting up there; nothing to do besides freeze. Who wouldn't come to Miami and enjoy the nice weather and beautiful women!”

Tracy Morgan and the limits of comedy

Is it fair to condemn comedian Tracy Morgan for his anti-gay rant? Commentator Roland Martin points out that shock jocks are given a free pass for language that would bring a lawsuit in another context.

Many CNN.com readers said the problem was not so much what Morgan said, but how he said it. Oklahomo said, “I believe most protesters to Morgan's rants were clear about his tone being the issue; it was not joking at all but vile hatred spoken to an ignorant audience that thinks the same way." icka1975 said, "Exactly. It's all in the tone and delivery."

NickV1point0 said, “We're inclined to forgive the material if it's well written and actually makes us laugh. Morgan was plain hatred, pure form, unfiltered by funny. That's why he drew the reaction he did. We don't laugh at pure hate, we laugh if someone can turn that hate into humor."

19random35 said, “I'm a fan of Morgan's work on 30 Rock, but I've always thought his standup was pretty weak. If what he said was reported accurately, it seems pretty awful. I also know that jokes from some of my favorite comedians might look pretty awful on paper, too. But they use devices like irony to ridicule prejudices. It takes a skilled comic to navigate such risky material, and I think Morgan fails in this department."

willyd said, “I find it hard to believe that the person who listened to Morgan and later wrote about it went to the show not knowing what kind of a comedian Tracy Morgan is. I find his routines offensive, as I do those of many other comics. If you don't like it, don't complain to everyone about it. Just don't go."

But Gaucho420 was not so forgiving. "Would Roland find it funny, or acceptable, if a white man said he would lynch his son if he was black?" he asked. "Same difference, loser." Neutronium said, "He said some sick things. He apologized for saying those things. Moving on."

A former transit police officer was freed early after being convicted in the shooting death of an unarmed man on an Oakland, California, train platform.  Johannes Mehserle was convicted of involuntary manslaughter - after testifying that he accidentally shot Oscar Grant with a gun instead of a Taser in January 2009 - and was sentenced last year to two years in prison.  He was released Monday because California law gave him good conduct credit for days served.

Mehserle's release apparently revived arguments over whether the killing was an accident and whether Grant was resisting arrest or trying to calm his companions. thomasmc said, "See? Murder is OK, if you're a cop, and your victim is black."

johnnyhouse said, "You did not see the video before it was edited. He was resisting when the cop drew what was supposed to be a Taser. As soon as the cop fired the shot he looked at his partner and could not believe what he had just done. That video was shown first, and Grant was resisting on the original part of the early video. At first the cops started out to get them to move on and it picked up from there to the disaster that happened. No one will ever convince me that this is not the way it happened."

In another exchange, FutureLogic said, "Have you even watched the video? He was clearly subdued, and restrained when the shooting occurred." tkessler45 said, "I saw the video too, and there was a decent amount of commotion going on. As much as it could be seen as blatant murder, it could also be seen as a mistake."

Guest said, “Maybe it was an accident, but then you'd also have to call the cop a moron for not knowing the weight difference between a Glock and a Taser.”

ZooLife2 said, “You're far more likely to get murdered by someone like Grant than you are to get shot by someone like Mehserle. Grant had served two state prison terms for felony convictions.”

AGoodwin said, “Grant was the father of a 4-year-old girl and was considered a peacemaker. Moments before he was shot he was pleading with his friends who were all cuffed up to calm down and be cooperative with police. Grant was seen begging the police officers not to shoot. This is not a man who was out that night to kill or loot.”