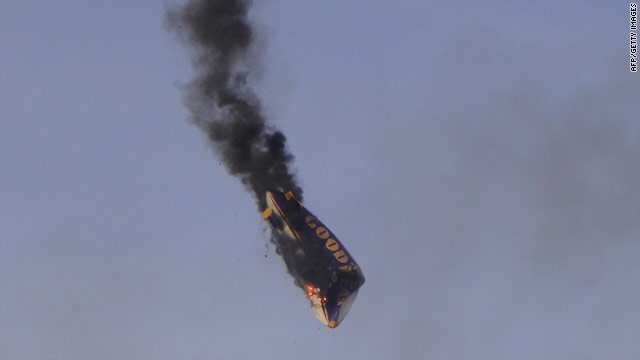 A Goodyear blimp plunges to the ground after catching fire over Germany on Sunday.
June 14th, 2011
07:54 AM ET

An Australian blimp pilot killed in a crash of his airship was being hailed as a hero Tuesday for saving the lives of three other people aboard the doomed craft.

Michael Nerandzic was trying to land a Goodyear blimp at an airfield in Reichelsheim, Germany, when his passengers, three journalists, smelled fuel and heard a loud noise from an engine, according to news reports, including one in the Daily Telegraph in Sydney, Australia.

Realizing the ship was in danger, Nerandzic lowered it to just two meters (6.5 feet) off the ground and told the journalists to jump, according to the news reports.

With the loss of ballast from the three passengers, the blimp shot up to 50 meters (165 feet) in the air, caught fire and then crashed.

Nerandzic's wife, Lyndy, told Australia's ABC Sydney that her husband sacrificed himself to save his passengers.

"When there was trouble on the airship he brought it down to as low as he could to let the passengers jump out and he stayed at the controls," ABC quoted Lyndy Nerandzic as saying. "As soon as they jumped out, of course, being an airship, he knew it would rise up and it did. They found him still at the controls when it crashed. He also steered it away from his ground crew."

"When they told me what he had done for the passengers, it didn't surprise me one little bit," she told the Illawarra Mercury. "He was a character. He was larger than life. He was so, so generous."

When the crash occurred, the airship was returning from a trip taking the journalists - a photographer from the Bild newspaper and two from the RTL TV network - to get aerial shots of a local festival, Spiegel Online reported.

The owners of the blimp, the Lightship Group, said in an "in memoriam" announcement on their website that Nerandzic, 53, was "one of the world's most experience airship pilots," with 18,000 hours of experience piloting airships over 26 years.

"Our thoughts at this time go to his wife and family, his colleagues past and present and many friends worldwide," the company's statement said.

The Lightship Group describes itself as the world's largest airship operator, with clients including Goodyear, Met Life, General Motors, DirecTV and Sanyo.