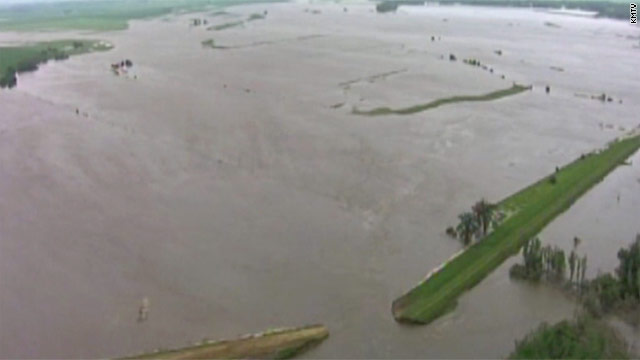 Scramble to save Iowa town as floodwaters approach

Authorities were scrambling Tuesday to protect the town of Hamburg, Iowa, after a swollen Missouri River broke two levees near the Missouri-Iowa border.

Fifty Army National Guard troops arrived in Hamburg Monday night to join efforts to finish a temporary levee before water from the levee breaches can reach the town - expected to happen sometime Tuesday, according to CNN affiliate KMTV. Crews are working to add another three feet to the top of the temporary levee, KMTV said. If the temporary levee does not hold, parts of Hamburg could be inundated with up to 10 feet of water.

The Iowa Department of Transportation closed one lane of northbound Interstate 29 for a half-mile while the work was underway, it said Monday. Floodwaters are expected to inundate the roadway within 48 hours, it said.

The current levees protecting Hamburg were designed to an elevation of 916 feet, the Corps of Engineers said in a statement Monday. "Based on the current size, new staff gauges and the model calibrated to new survey data, a new water surface elevation of 918 feet has been estimated," according to the Corps.