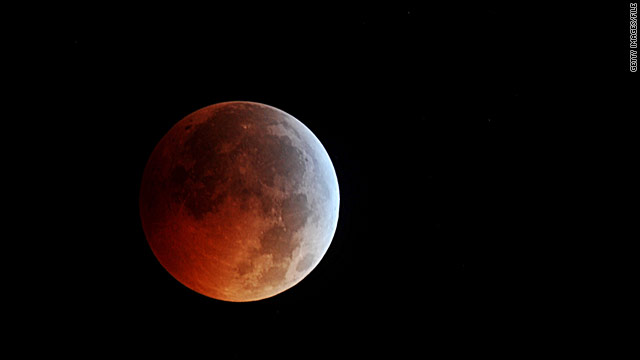 Sky gazers in much of the world will see a spectacular lunar eclipse Wednesday night. But if you're in North America, Greenland or Siberia, you'll have to view it virtually.

Lunar eclipses occur two to four times a year, when the sun, Earth and moon align. This one is special because the period of totality - when the moon is completely covered by Earth's shadow - will last for one hour, 40 minutes, considerably longer than usual, said David Dundee, astronomy program director at the Tellus Science Museum in Cartersville, Georgia.

"All lunar eclipses are cool, but in a total lunar eclipse, the moon turns a kind of a red color," he said. The middle of Earth's shadow isn't black, it's red, Dundee explained, because the light waves from the sun that are on the red end of the spectrum bend around the planet at just the right angle to bathe the moon in red light.

Beginning at 17:24 UTC (2:24 p.m. ET), the moon will appear to dim slightly as it moves into Earth's penumbral shadow, then turn shades of orange and red as the planet's full (or umbral) shadow overtakes it. NASA explains it all in an animated diagram. Distortion from Earth's atmosphere may make the edges of the moon look fuzzy, Dundee noted.

Sulfur dioxide from a volcano erupting in Chile could make the southern part of the moon darker during totality, atmospheric scientist Richard Keen of the University of Colorado told Spaceweather.com.

"It's going to look like the moon is being attacked by the Cookie Monster as you see a big bite being taken out of it," Dundee said. "... The shadow is round because we live on a round planet."

The entire process will last five hours, 36 minutes, ending at 23:00 UTC (7 p.m. ET), making it the longest one of the 21st century, astronomer N Rathnasree told the Indian network NDTV. The best and longest views will occur in a triangular swath from the west coast of Australia; to India, Kazakhstan, Turkey and all of the Middle East; to the eastern two-thirds of Africa. People in the Far East and South America will get a shorter show.

If you are fortunate enough to see it with your own eyes, share your images with CNN's iReport.

Many cultures' mythology explains lunar eclipses as a dragon or other monster eating the moon, Dundee said.

"The remedy is to make loud noises to scare the dragon away. And you know what? It works every time," he said. "The moon always comes back."

Netflix says it has acquired the rights to Roald Dahl's stories and plans to create a "unique universe" of productsŌĆtwitter.com/i/web/status/1ŌĆ”86
cnni

6:01 am ET September 26, 2021 RETWEET
UK start-up Small Robot Company is bringing autonomous farming to life with robots that can identify and preciselyŌĆtwitter.com/i/web/status/1ŌĆ”PJ
cnni

5:01 am ET September 26, 2021 RETWEET
The US Space Force, the newest branch of the US military, has unveiled a new uniform prototype for its members, knoŌĆtwitter.com/i/web/status/1ŌĆ”Mt
cnni

4:01 am ET September 26, 2021 RETWEET
27-year-old Nathan Paulin walked a 600-meter slackline from the Eiffel Tower to the other side of the Seine river iŌĆtwitter.com/i/web/status/1ŌĆ”jC
cnni