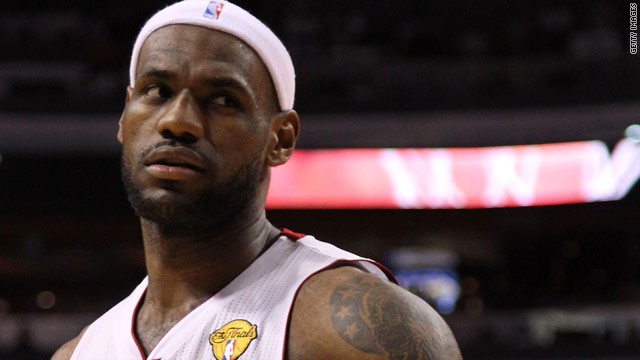 Minor-league baseball team to give fans rings like LeBron's

The Peoria Chiefs, a Class A minor-league affiliate of the Chicago Cubs, will give every fan attending Thursday night's game a replica of LeBron James' NBA championship ring. That means as each fan passes through the turnstiles of O'Brien Field, he or she will be handed ... nothing.

James' Miami Heat team fell to the Dallas Mavericks four games to two in the NBA finals, which ended Sunday night. James, who promised Heat fans multiple championships when he bolted Cleveland for South Beach last summer, has now gone eight seasons without being able to wear a championship ring.

James' performance in the NBA Finals was widely panned. A two-time regular season Most Valuable Player, James scored only 21 points in the fourth quarters of all six finals games combined.

Which gave the Chiefs a chance to pile on the promotions Thursday, when they take on the Wisconsin Timber Rattlers.

"The Chiefs are looking into whether or not the game can skip the fourth inning to honor King JamesÂ who took off the fourth quarter of every finals game," the team said in a press release.

No word on whether the umpires will allow that, but these two promotions are beyond the league's control:

"One lucky fan will win a replica of James' 2011 Finals MVP Award which he earned with his clutch fourth quarter play. Fans will also have the opportunity to learn how to perform the Heimlich to prevent themselves or their colleagues from choking in a big situation," the Chiefs press release said.

But before they pile on James, the Chiefs may want to take a look at the Midwest League standings. The team is fifth place in the league's West Division.

Looks like the James replica rings are perfect for the Chiefs, too.

The Yangtze had dried up in parts as swaths of China battle drought and the nation's worst heat waves in more thanâ€twitter.com/i/web/status/1â€¦Xu
CNNweather

12:46 pm ET August 17, 2022 RETWEET
â€śAmong other flaws, the public guidance during the coronavirus pandemic was â€śconfusing and overwhelming,â€ť the atwitter.com/i/web/status/1â€¦xPgtzoiU
susancandiotti

12:40 pm ET August 17, 2022 RETWEET
The lack of a public deadline or plan of action on the Colorado River came as a surprise to stakeholders and expertâ€twitter.com/i/web/status/1â€¦Bd
CNNweather