North Korea fired at least one ballistic missile that is believed to have flown over Japan, according to regional oâ€twitter.com/i/web/status/1â€¦8l

The National Archives told Trump lawyers in May 2021 that letters with North Korea's Kim Jong Un were missing, recoâ€twitter.com/i/web/status/1â€¦SC

An investigation has found systemic abuse and misconduct within women's pro soccer and determined that the Nationalâ€twitter.com/i/web/status/1â€¦Iz

The 2022 award goes to Swedish geneticist Svante PĂ¤Ă¤bo for his pioneering work in the field of human evolutiocnn.it/3E6RJFgVo

Brazil election: The race between President Bolsonaro and former President â€śLulaâ€ť goes to a second round after a twitter.com/i/web/status/1â€¦rU03JF 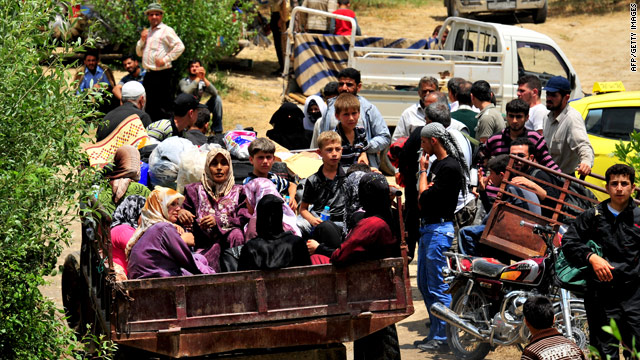 Turkish Prime Minister Recep Tayyip Erdogan plans to huddle with a special Syrian envoy on Wednesday in an effort to help stem the growing tide of refugees racing into Turkey from conflict-wracked Syria. The number of Syrians who have crossed the border now stands at 8,421, according to Turkey's disaster and emergency management directorate.

That flight has been spurred by violence and a military offensive in the conflict-scarred country, and Turkey is worried that the border crisis could deteriorate and destabilize the region.

Of the refugees, 4,368 are children and 73 Syrians are now being treated in Turkish hospitals, the emergency directorate said. More than 1,230 tents have been set up in a number of locations.

Actress Angelina Jolie, a longtime goodwill ambassador for the U.N. refugee agency, has submitted an application to visit the refugees in Turkey, Turkish Foreign Ministry spokesman Selcuk Unal confirmed to CNN by phone. He says the government is "evaluating" the request.

GPS: The consequences of Syrian refugees in Turkey

The trial of three Bahraini opposition journalists accused of fabricating news to disrupt peace during the civil unrest in the Gulf state adjourned after a few minutes Wednesday. Civilian High Court judges postponed proceedings until Sunday after the defense presented documents showing detailed communications between editors of the Al-Wasat newspaper, King Hamad and other top government officials.

Mansoor al-Jamri, former editor-in-chief of the publication, Walid Nouwaihidh, former managing editor and Aqeel Mirza, the former head of the local news department, are on trial after being forced to quit the publication in April. A fourth man, Ali al-Sharifi, is being tried in absentia.

Roots of Unrest: Protesters initially took to the streets of Manama to demand reform and the introduction of a constitutional monarchy. But some are now calling for the removal of the royal family, which has led the Persian Gulf state since the 18th century.

Young members of the country's Shiite Muslim majority have staged protests in recent years to complain about discrimination, unemployment and corruption, issues they say the country's Sunni rulers have done little to address. The Bahrain Center for Human Rights said authorities launched a clampdown on dissent in 2010. It accused the government of torturing some human rights activists.

"We strongly believe that the resolution is being abused for regime change, political assassinations and foreign military occupation," Zuma said at a budget vote debate before the National Assembly in Cape Town. "These actions undermine the efforts of the African Union in finding solutions to the problems facing its member states," he said in an appeal that called on all parties to respect international humanitarian law and called further for reform of the U.N. Security Council.

Unlike some other world leaders, Zuma has not called for the longtime Libyan leader Moammar Gadhafi to step down. Neither has Zuma's African National Congress party nor the African Union, which Gadhafi once led. The AU also has criticized the NATO airstrikes.

A meeting was to be held on Wednesday between Yemeni Vice President Abdu Rabu Mansoor Hadi and members of the country's youth revolutionary movement, officials confirmed.

Hundreds of thousands of anti-regime protesters who want President Ali Abdullah Saleh to depart from office were gathering in front of Hadi's Sanaa residence and are calling on him to accept demands to form a presidential transitional council.

Along with Sanaa, protesters took to the streets on Wednesday in Tazi, Ibb, Hodieda, and Aden. Saleh is in a hospital in Saudi Arabia, where he is recovering from wounds following a June 3 attack on the presidential compound.

Roots of Unrest: Protesters have called for the ouster of Saleh, who has ruled Yemen since 1978. The country has been wracked by a Shiite Muslim uprising, a U.S.-aided crackdown on al Qaeda operatives and a looming shortage of water. High unemployment fuels much of the anger among a growing young population suffering in poverty. The protesters also cite government corruption and a lack of political freedom. Saleh has promised not to run for president in the next round of elections.

As the lowest-lying nation in the world, the Maldives may be an ideal place to learn about environmental protectionâ€twitter.com/i/web/status/1â€¦ry
cnni

As the lowest-lying nation in the world, the Maldives may be an ideal place to learn about environmental protectionâ€twitter.com/i/web/status/1â€¦ry
cnni

North Korea fired at least one ballistic missile that is believed to have flown over Japan, according to regional oâ€twitter.com/i/web/status/1â€¦8l
cnnbrk

4:12 pm ET October 3, 2022 RETWEET
An investigation has found systemic abuse and misconduct within women's pro soccer and determined that the Nationalâ€twitter.com/i/web/status/1â€¦Iz
cnnbrk

2:34 pm ET October 3, 2022 RETWEET
The 2022 award goes to Swedish geneticist Svante PĂ¤Ă¤bo for his pioneering work in the field of human evolutiocnn.it/3E6RJFgVo
cnnbrk