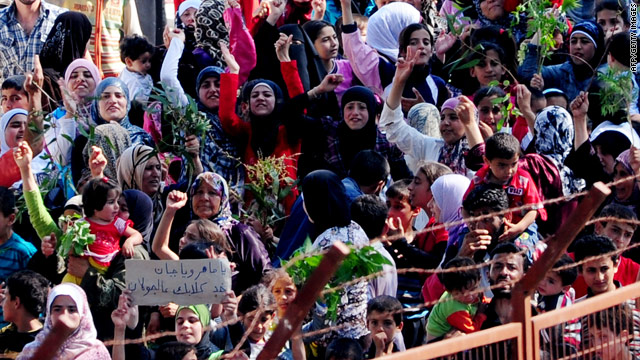 [Updated 1:28 p.m.] Countries in the Middle East and North Africa have been swept up in protests against longtime rulers since the January revolt that ousted Tunisian strongman Zine El Abidine Ben Ali. In many cases, these demonstrations and movements have been met with brute force and escalated into seemingly unending violence.

The number of Syrian refugees now in Turkey stands at 8,904, Turkish emergency officials said on Thursday.

This increase comes as Turkish government officials, such as Prime Minister Recep Tayyip Erdogan and Foreign Minister Ahmet Davutoglu, met with a special Syrian envoy to help stem the growing tide of refugees.

The U.N. human rights office called for "a thorough probe into the allegations of widespread abuses committed by Syrian authorities during their violent crackdown."

A preliminary report prepared by the Office of the High Commissioner for Human Rights said that as of mid-June, the number of those killed during such incidents is believed to have exceeded 1,100 persons, many of them unarmed civilians; among them were women and children." That's over a period of three months.

The OHCHR said reports indicate than up to 10,000 people have been detained over three months, and it has received information that security forces "have perpetrated acts of torture and other cruel and inhuman treatment against detainees, resulting in death in custody in some cases."

Syrian civilian: Why is our president killing us?

The report, which covers the period from March 15 to Wednesday, is based on data from U.N. agencies. human rights activists, a small number of victims and witnesses, and various groups. The OHCHR said it had to rely on these sources because it hasn't been able to get staffers "on the ground in Syria."

Opinion: What could shake Syria's regime?

He said the vote would be carried out "at the most at the end of the year."

Rebel forces said they have made progress in recent days in the fight against Gadhafi's forces. They've taken control of the mountainous Jebel Nafusa region southwest of Tripoli, said Ahmed Bani, an officer with the rebel forces. Rebels have also made gains in the western city of Zlitan, Bani said.

How will the Libya conflict play out?

U.S. lawmakers filed a suit Wednesday that challenges the nation's participation in the Libya mission, accusing President Barack Obama of failing to consult with Congress over the military effort in the North African country.

The White House denied that accusation, saying Obama has not violated the War Powers Resolution by intervening militarily for more than 60 days without seeking approval from Congress.

What does the Libya lawsuit mean?

House Minority Leader Nancy Pelosi, D-California, said Thursday that she believes Obama had the authority to engage U.S. forces in the Libya mission.

Roots of Unrest: Protests in Libya started in February when demonstrators, fed up with delays, broke into a housing project the government was building and occupied it. Gadhafi's government responded with a $24 billion fund for housing and development.

A month later, more demonstrations were sparked when police detained relatives of those killed in an alleged 1996 massacre at Abu Salim prison, according to Human Rights Watch. High unemployment and demands for freedom have also fueled the protests.

Security forces battled armed Islamic militants in one town and reports surfaced of arrests and deaths in two other cities.

Fighting erupted for six hours in the Lahj province capital of Hawta on Wednesday when armed Islamic militants attacked government compounds, according to a security official - who asked not to be named because he's not authorized to speak to the media.

Three people died and at least 12 people were wounded in the Wednesday clashes, the official said. The fierce fighting between security personnel and insurgents resumed on Thursday, witnesses said.

Yemeni state TV also reported unrest in the southern towns of Zinjibar and Aden. It said al Qaeda militants in Zinjibar killed two residents and injured another in a mortar attack, and it reported the arrests of 10 al Qaeda members and five other people for firing at civilians and ransacking stores in Aden's Mansoura area.

On Thursday, Secretary of State Hillary Clinton classified al Qaeda in the Arabian Peninsula operative Othman al-Ghamdi as a "specially designated global terrorist" under an executive order that "targets terrorists and those providing support to terrorists or acts of terrorism."

A senior administration official told CNN that Ghamdi was released from the Guantanamo detention facility in 2006 and had been one of well over 100 detainees the Bush administration sent to Saudi Arabia.

Al-Ghamdi "has been involved in raising funds for the organization's operations and activities in Yemen" and has "worked with other AQAP members to plan and stockpile weapons for future attacks," the State Department said in a news release.

He appeared in a video alongside Fahd al-Quso, an AQAP operative wanted for his role in the USS Cole bombing in October 2000, the department said.

Roots of Unrest: Protesters have called for the ouster of President Ali Abdullah Saleh, who has ruled Yemen since 1978. The country has been wracked by a Shiite Muslim uprising, a U.S.-aided crackdown on al Qaeda operatives and a looming shortage of water.

High unemployment fuels much of the anger among a growing young population suffering in poverty. The protesters also cite government corruption and a lack of political freedom. Saleh has promised not to run for president in the next round of elections.

A painting of Paris by Vincent van Gogh, which has almost never been seen by the public after being stashed within‚Ätwitter.com/i/web/status/1‚Ä¶nX
cnni

10:00 am ET February 28, 2021 RETWEET
Here are 8 tips from sleep and anxiety experts on how to shut down your brain and coax your body back into much-nee‚Ätwitter.com/i/web/status/1‚Ä¶fS
cnni

4:02 am ET February 28, 2021 RETWEET
A painting of a kangaroo in Western Australia is the oldest known rock art in the country, according to scientists,‚Ätwitter.com/i/web/status/1‚Ä¶5U
cnni

3:00 am ET February 28, 2021 RETWEET
A new study found that doctors gave the wrong antibiotics to nearly half of 670,400 people diagnosed with a UTI. In‚Ätwitter.com/i/web/status/1‚Ä¶P4
cnni