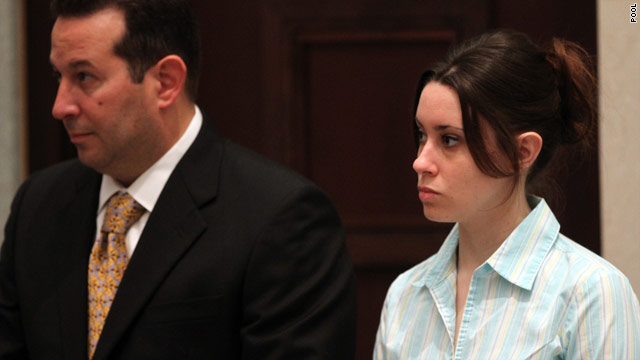 Casey Anthony and her attorney, Jose Baez, listen to testimony in her murder trial on Thursday.
June 16th, 2011
10:52 AM ET

Casey Anthony's defense began presenting its case Thursday in her capital murder trial, calling to the stand a crime scene investigator and an FBI forensic examiner.

Gerardo Bloise, crime scene investigator with the Orange County, Florida, Sheriff's Office, led off the defense witnesses. Bloise, who previously testified for the prosecution, discussed the execution of a search warrant at the Anthony home on August 6, 2008, and his duties, which were to examine the clothing in Casey Anthony's closet with an alternative light source for any stains.

Bloise testified no stains were found on the pants Anthony wore on June 16, 2008, the day her 2-year-old daughter Caylee was last seen. However, he acknowledged to prosecutor Linda Drane Burdick on cross-examination that Anthony's mother, Cindy, had told authorities she had washed the pants after that day.

Bloise also testified he examined a vehicle belonging to Anthony Lazzaro, Casey Anthony's then-boyfriend. He said he found a stain in the car's interior, but a presumptive test for blood was negative.

Prosecutors allege that Casey Anthony, 25, killed her 2-year-old daughter, Caylee, in 2008 by using chloroform on her and putting duct tape over her nose and mouth. They allege she then put the little girl's body in black garbage bags and stored it in her trunk before dumping it in woods near her home.

7:30 pm ET January 17, 2022 RETWEET
The parents of Austin McEwen, one of the six victims killed after a tornado pummeled an Amazon warehouse in Edwardsâ€twitter.com/i/web/status/1â€¦dQ
cnni

6:31 pm ET January 17, 2022 RETWEET
RT @lauravigilante: I'm absolutely gutted. Jay was the kindest, most gracious man. A friend to me & everyone at CNN. He had everyone's backâ€¦
sarasidnerCNN