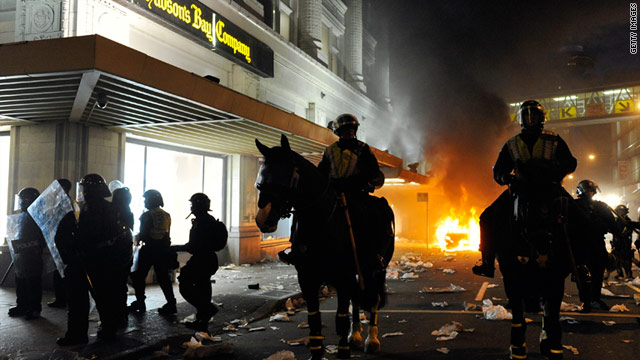 Overheard on CNN.com: Vandals in Vancouver?

"I look at this photo and say to myself, 'This is Canada? Are you sure this is not a photo of Syria or Iran or Libya? This is very weird! C'mon CNN take off this picture of Arab Summer and put in the correct photo!' "–nacho1

Entertainment turned ugly Wednesday night when the Vancouver Canucks lost the Stanley Cup to the Boston Bruins in the final game of the National Hockey League's annual championship. Hundreds of Canuck fans went wild in downtown Vancouver, turning over vehicles and setting them afire.

Giblet said, "I am utterly ashamed! Way to go, morons! We just spent a huge amount of money showing the world what a fantastic place Canada and especially Vancouver is, and now I log in to CNN this morning and this is what I see? Once again, a few mindless idiot hooligans spoil all the hard work and dedication of countless citizens!"

showmeranche said, "Ah, the gentle, peaceful Canadians are rioting over a hockey loss. Ranks right up there with the folks seeking freedom in the Middle East and the Greeks whose government has spent them into oblivion." JDonaldson agreed, "I can think of a dozen better reasons to mob riot. Let's look at this as a dry run for when it gets real."

ntyatecafe said, "Only an idiot would vandalize his own town. I have this image stuck in my head of one of the rioters trying to find his car afterwards, only to hear the ŌĆśbeep-beepŌĆÖ coming from an overturned pile of smoldering wreckage."

prsguitars said, "I guess our classy northern neighbors, the Canadians, really are passionate about ŌĆ” their hockey." cuffhead said, "Do these idiots have anything else going on in their lives?" hingedlwnb said, "Polka bands. Now do you understand?"

But other CNN.com readers said these were not ŌĆ£fans.ŌĆØ BigSir said, "Done by kids who got hit in the head with a hockey puck a few too many times." cherrybaby said, "Yay, let's judge an entire country of people based on the actions of a few thousand with nothing better to do! That makes sense." Stewart33 said, "Kids who covered their faces and brought flammable materials to downtown areas are not 'fans.' They're punks, and every city has them."

After surveillance cameras caught a man urinating into Portland's reservoir, city administrators decided to drain all 8 million gallons. Although the trespasser's addition was unlikely to do any harm, a few CNN.com readers agreed about the "yuck factor.ŌĆØ RichieP said, ŌĆ£Seriously? Drinking water just sits out there in a pond in the woods? That's gross enough without one dude peeing in it.ŌĆØ As for the sterility of urine? Monica said, ŌĆ£Sure. you can drink my pee, but I don't want to drink yours.ŌĆØ

Most CNN.com readers, however, were appalled by the waste, especially those from Texas. Thirsty in South Texas said, ŌĆ£And here we sit in one of the worst droughts we have ever had, wishing we had water, praying for rain, and they are tossing it out for no good reason.ŌĆØ Marc L from NY said, ŌĆ£So the city thinks that ickyness, which is a mental obstacle, is worth all of that money? They must be the only municipality in the country that isn't facing tough economical times.ŌĆØ

Smarter than RichieP replied, ŌĆ£Hey Richie, pretty much all water just sits out in the open before you drink it. You think it all comes from underground tanks? Unless you have well water, this is what you get. And that's why it's cleaned first.ŌĆØ te said, ŌĆ£Where do you think all drinking water comes from? The lakes, which are full of fish, snakes, turtles, ducks, and people. Do you truly believe they all get out and use the public restroom?ŌĆØ

conradshull said, "Me and my buddies grew up sneaking into at night and swimming in our town's reservoir. It was usually the first thing we did in the late evening before riding around town in the middle of the night on our bikes." svann asked, ŌĆ£Does Portland know what bears do in the woods?ŌĆØ

Greg, a Portlander, said there was a secret agenda, ŌĆ£The city is considering covering these reservoirs, but the public is not on board because of the cost. The city will drain this reservoir at taxpayer expense to show taxpayers why they must cover their reservoirs. The city couldn't be happier that someone urinating in the reservoir is in the spotlight. Now the city can begin draining wallets as well.ŌĆØ

GOP candidate Herman Cain is a bigot, ignorant, or a fear-monger, writes Dean Obeidallah, comic and producer of the New York Arab-American Comedy Festival. John McCain countered Romney's remarks in 2007, he writes. Why have none of the current candidates challenged Cain's?

Possibly because they agree, suggested some readers. chef said ŌĆ£Cain is right. Muslims need not apply for anything in the US as far as I'm concerned, including citizenship. With Muslims, their crazy religion comes first and everything else second, including their families. They are not to be trusted, here or in the Middle East.ŌĆØ

rfhendrix said, ŌĆ£You cannot trust people who hide and lie about their true motives to the point of killing themselves and others to prove a point, regardless of what this comedian thinks.ŌĆØ Aristotle120 said, ŌĆ£This is not some mindless discrimination against people for no reason; it is rational discrimination, just like the one you perform every day when walking down the street at night and deciding if an approaching person or group is or is not a threat."

But other readers disagreed, sometimes sarcastically. Guest said, ŌĆ£We need to get back to what made this country great, which is blatant racism.ŌĆØ madcrowd said, "I hate it when white people get so racist and pig-headed about people of color. " He was slipped a note, read it, and then exclaimed, "WELL SHUT MY MOUTH !!! You mean to tell me this Cain fella is what? I thought only white folks was racist?"

MSfromCA said, 'In my lifetime, discrimination against Catholics was common. I still hear some pretty silly things from fundamentalist Christians, especially Southerners. This is just the latest group to be discriminated against." grant18 said, ŌĆ£Wouldn't you think a candidate for President of the United States would have read our Constitution? And Seattle1 said, ŌĆ£Article 6 of the Constitution states:ŌĆÖNo religious test shall ever be required as a qualification to any office or public trust under the United States.ŌĆÖ ŌĆ£

Jskizzle said, "Most Muslims are peaceful and interpret the Quran as peaceful. Just like every other religion, a few fanatics believe in violence." jaumais said, "Violent religion? Look up 'The Crusades' and 'The Inquisition' and 'The Salem Witch Hunts.' Islam doesn't corner the market on violence."

gerbiltea As 1% of the population, even if we wanted to impose such a thing as Shariah law–which we don't–how would we? We're somewhat lacking in clout. We're a majority in ... Dearborn, MI."

The world has never had more advanced medical science, but it's also never been so interconnected. So what can be dŌĆtwitter.com/i/web/status/1ŌĆ”lR
cnni

1:12 am ET January 29, 2020 RETWEET
RT @camanpour: Trump said he wanted his peace plan to be a "win/win". Where is the win for the Palestinians? Jared Kushner: "He's delivereŌĆ”
sarasidnerCNN

1:06 am ET January 29, 2020 RETWEET
It has been described as one of the oldest and most played sports in history. But, World Chase Tag is the first andŌĆtwitter.com/i/web/status/1ŌĆ”hN
cnni

1:01 am ET January 29, 2020 RETWEET
The number of confirmed cases of the Wuhan coronavirus in China has now officially exceeded that of the SARS outbreŌĆtwitter.com/i/web/status/1ŌĆ”4P
cnni

12:50 am ET January 29, 2020 RETWEET
A Cuban man who died Monday morning in Miami is the sixth person to pass away since October while in custody of USŌĆtwitter.com/i/web/status/1ŌĆ”tT
cnni