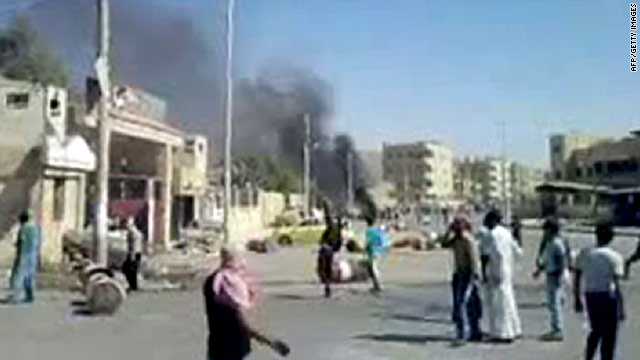 Countries in the Middle East and North Africa have been swept up in protests against longtime rulers since the January revolt that ousted Tunisian strongman Zine El Abidine Ben Ali.

In many cases, these demonstrations and movements have been met with brute force and escalated into seemingly unending violence.

Starting a revolution with technology

Prayer and politics: How Friday became the Middle East's day of protest

Protests unfolded in several towns big and small across the country, including the Damascus area, Latakia, Homs and Hama, where thousands of people took to the streets, according to Rami Abdelrahman of the London-based Syrian Observatory for Human Rights.

Abdelrahman said four people died in Homs and one in Deir El Zour during demonstrations in Syria. The Lebanese army said fighting over the Syrian issue in the Lebanese city of Tripoli left at least four dead.

Three Syrian security personnel were injured by "militants" in a Damascus suburb, the government's state-run TV said, the first report of violence on another tense Friday of mass protests erupting across the nation.

Rami Makhlouf, the powerful head of the Syriatel phone company and part of the regime's inner circle, has announced that he plans to quit his business and go into charity work. Makhlouf, who is the cousin and confidant of President Bashar al-Assad, is widely unpopular among protesters and is a symbol among many citizens of the regime.

Many Syrians fleeing the violence continued to pour across the Turkish border, with the number of refugees now more than 9,600.

In the Altinozu refugee camp across the restive Syrian border, actress Angelina Jolie, who is a goodwill ambassador for the U.N. refugee agency, is visiting Syrian refugees in Turkey on Friday, a trip aimed at shining a spotlight on the plight of civilians in the country.

A string of fresh explosions hit the Libyan capital Friday.

Libyan leader Moammar Gadhafi claimed that NATO's alliance will be defeated, according to an audio address played to pro-government crowds in Tripoli's Green Square. He called the Libyan rebels traitors.

Why a slow-moving NATO is good for Libya

An estimated 30,000 people gathered in Sitra on Friday, according to an opposition figure CNN does not name for security reasons and an Al Wefaq opposition official.

It is the second public gathering organized by the opposition Al Wefaq after the end of martial law June 1.

Al Wefaq notified the government of its intent to gather this week, as required.

Security forces were present but did not interfere in the gathering. This shows "we have a very high level of control" over the crowds, said Khalil al Marzooq, the Al Wefaq official.

Roots of Unrest: Protesters initially took to the streets of Manama to demand reform and the introduction of a constitutional monarchy. But some are now calling for the removal of the royal family, which has led the Persian Gulf state since the 18th century. Young members of the country's Shiite Muslim majority have staged protests in recent years to complain about discrimination, unemployment and corruption, issues they say the country's Sunni rulers have done little to address. The Bahrain Center for Human Rights said authorities launched a clampdown on dissent in 2010. It accused the government of torturing some human rights activists.

1:45 pm ET April 21, 2021 RETWEET
A Spanish court has ruled that the family of the late dictator General Francisco Franco is entitled to keep a treas‚Ätwitter.com/i/web/status/1‚Ä¶SJ
cnni

1:30 pm ET April 21, 2021 RETWEET
JPMorgan clearly underestimated the magnitude of the backlash of financing the European Super League, which a sourc‚Ätwitter.com/i/web/status/1‚Ä¶N1
cnni

1:16 pm ET April 21, 2021 RETWEET
Russia's President Vladimir Putin called for all citizens to get vaccinated against Covid-19 as he gave his annual‚Ätwitter.com/i/web/status/1‚Ä¶Ne
cnni