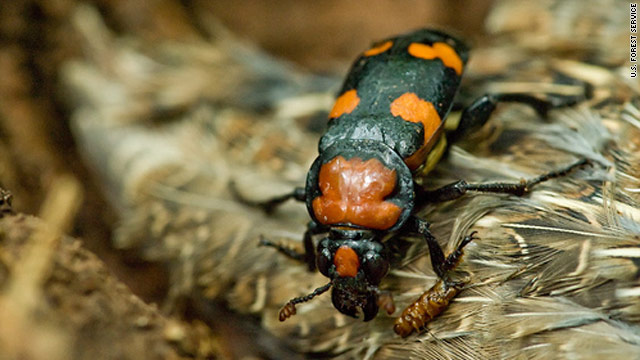 An American burying beetle perches on the wing of a dead bird. This species of beetle is endangered.
June 17th, 2011
02:45 PM ET

What do you do with one of the world's most endangered insects? Throw it in a hole with a dead animal, of course.

That's exactly what about 35 scientists, foresters and volunteers did this week with 150 pairs of American burying beetles in Ohio's Wayne National Forest, said Bob Merz, director of the Center for American Burying Beetle Conservation at the St. Louis Zoo.

Entomologists for years have been working to save the critically endangered beetle, a hard worker on nature's cleanup crew. The 1.5-inch beetles were once found in 35 states, but by 1989 they were known to live in only one place - an island off Rhode Island. Since then, they've been found in a few other places.

The St. Louis Zoo, the Cincinnati Zoo and The Wilds nature preserve in Ohio, and the Roger Williams Park Zoo in Providence, Rhode Island, are working together to breed and raise burying beetles in captivity.

"We pay very careful attention to the genetics of it," Merz said. "We definitely arrange the marriage."

At the right time, pairs of beetles are taken into forest habitat areas. Workers dig a hole, place a dead rat or bird in the hole, place a pair of beetles on or next to the carcass, cover it with cardboard and dirt, "and we hope the beetles do their stuff," Merz said.

In a natural setting, the beetles will dig the hole themselves underneath the carcass and let it fall in. If they have to move the carcass, they lie on their backs and pass it along with their legs like a crowd-surfing rock star. One pair of beetles can move a carcass 3 to 6 feet in one night in this manner, Merz said.

For the whole process to work properly, the carcass must weigh no less than 100 grams (3.5 ounces) and no more than 200 grams (7 ounces), Merz said.

Merz isn't sure how important American burying beetles are to Earth's ecosystem. But he doesn't want to find out the hard way.

"I'd rather find out what we might be losing than what we've lost," he said.

Two Japanese sisters have been confirmed as the world's oldest living identical twins and the oldest ever identicalâ€twitter.com/i/web/status/1â€¦4H
cnni