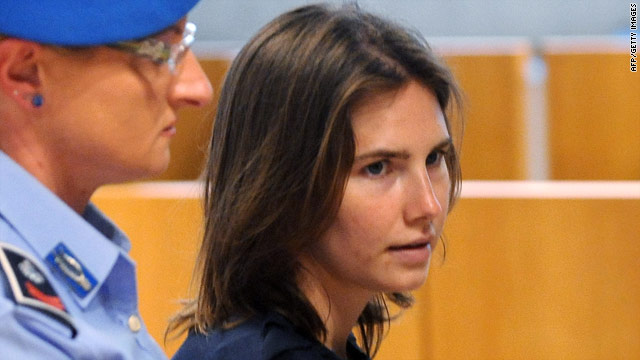 An Italian inmate on Saturday testified that a fellow prisoner confessed that Amanda Knox, the American student convicted of murder in Italy, was not actually involved in the killing.

Knox was sentenced last year to 26 years in prison for the death of Meredith Kercher at a villa the two shared in Perugia, the central Italian town where both were students.

Knox has vehemently proclaimed her innocence and her family has continued to fight the conviction.

There was nearly two hours of legal wrangling between attorneys before the judge decided to allow inmate Mario Alessi to testify. Alessi is serving a 30-year sentence for kidnapping and killing a 18-month old boy.

Alessi testified that Rudy Guede, who has also been convicted of being involved in Kercher's murder and is serving a 16-year sentence, told him that Knox was not involved in the killing.

The speaker of parliament in the Maldives, former President Mohamed Nasheed, was being treated for shrapnel woundsâ€twitter.com/i/web/status/1â€¦ug
cnni

3:45 am ET May 7, 2021 RETWEET
At least 25 people, including one police officer, were killed in a anti-drug raid in a slum in Rio de Janeiro, accoâ€twitter.com/i/web/status/1â€¦DZ
cnni

3:15 am ET May 7, 2021 RETWEET
As China awaits WHO approval for its vaccines, one country is sending theirs back cnn.it/3trPljx https://t.co/q5lDMP24RB
cnni

2:48 am ET May 7, 2021 RETWEET
Beijing has ordered China's cinemas to use the box office this year to spread propaganda celebrating the Communistâ€twitter.com/i/web/status/1â€¦vy
cnni

1:01 am ET May 7, 2021 RETWEET
Some SNL cast members arenâ€™t happy about Elon Musk. Heâ€™s part of a long tradition of disliked hoswashingtonpost.com/arts-entertainâ€¦2GMF
susancandiotti