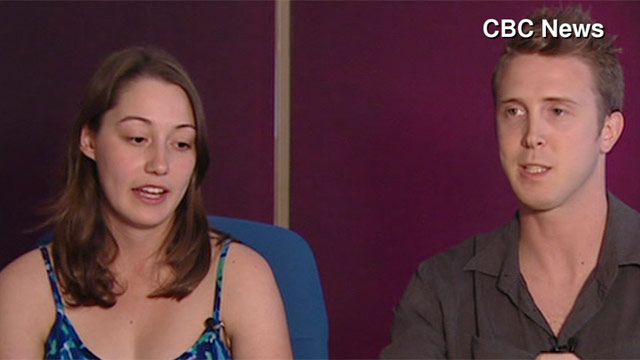 "So I went back for her," Jones said. "They (the police) started beating us with the shields, trying to get us to move. I don't know why; we weren't being aggressive towards them or anything like that. But they eventually they passed over us, and that's when we were on the ground. She was a bit hysterical afterwards, obviously, and I was just trying to calm her down."

See other images from the riot

The couple said they were shocked by the sudden media attention they'd received and didn't know how to respond, but they decided they couldn't let wild internet rumors about the image go unanswered.

"Some people didn't think it was my girlfriend," Jones said. "You know, I drugged somebody, or there was that thing where she got stabbed or something like that? The rumors got out of hand so quickly. We just wanted to clear it up."

Thomas acknowledged the thought of millions of people seeing her exposed legs and black panties made her uncomfortable at first, "but I didn't pose that way, so I think people are able to see it's a moment that happened to be on camera and that it's not embarrassing at all."

"It's actually a really beautiful shot," she said. "I wouldn't have been present enough in that moment to see what was going on, so now I can see that moment, and it's pretty incredible."

[Original post 12:09 p.m. June 17] It was the smooch seen round the world, and now we know the passionate couple's names. At least, we think we do.

The couple were photographed lying in a romantic-looking embrace in the middle of a Vancouver, British Columbia, street while a post-hockey game riot swirled around them Wednesday night.

"It is something he would do; that's our boy," his mother, Megan Jones of Perth, told ninemsn. "He has always lived in his own world. He's special like that. He doesn't always connect with what's going on around him."

CNN has reached out to the couple but has not confirmed that they are the people in the photo.

Some self-described witnesses have said the woman was injured and the man was comforting her, but online speculation is rife that the photo was staged or that the kissing couple are opportunistic performance artists.

Brett Jones of Perth, who told the Toronto Star he is Scott Jones' father, said the picture is legitimate but is not what it seems.

"She had actually been injured," Brett Jones told the Star. A riot police officer had knocked her down with a shield, he said. "He lay down next to her to comfort her. She was crying, and he just kissed her to calm her down."

Rich Lam, the Getty Images photographer who captured the image, wasn't sure what was happening.

"I just saw these two people and I thought they were hurt," he told NPR. "... I didn't really know what I got until the editor pointed it out."

Brett Jones said he told his son not to worry about the doubters.

"Tell your story as it happened and there's nothing you can do about them," he told his son, according to the Star. "I think it's amazing."