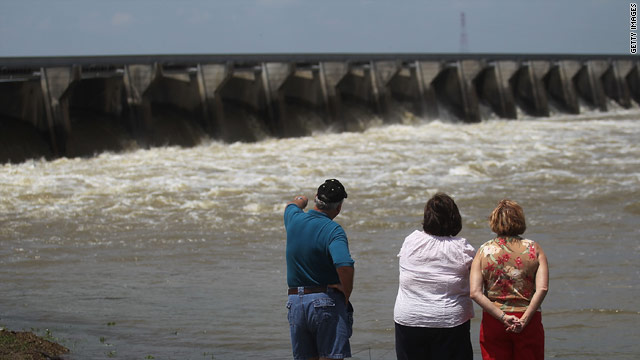 The Army Corps of Engineers on Monday closed the last floodgates on Louisiana's Bonnet Carre Spillway, which was opened May 9 to prevent the Mississippi River from flooding New Orleans and Baton Rouge.

"The water's down to an acceptable level," Corps spokeswoman Rachel Rodi told CNN Monday. The threshold for water diversion is 15 and rising, according to computer models, she said.

The corps began releasing water through the spillway after heavy rains last month, ultimately opening 330 of the 350 bays to divert water from the Mississippi River into Lake Pontchartrain, Rodi said.

Upriver, another spillway, the Morganza, was opened to protect Baton Rouge, the state's capital. The move sent excess water gushing through the Atchafalaya River Basin, a less populated area of south-central Louisiana. The Corps began closing bays at the Morganza Spillway three weeks ago.

More than 3,000 people were evacuated in St. Landry and St. Martin parishes because of that spillway's opening.

"Everybody from our parish is back. We had some camps that were affected. We had to shut down some boat launches, but for the most part everybody's back and we're OK," Bellard told CNN.

Rodi said the next steps for the Corps of Engineers will be spillway maintenance.

"We're going to inspect the structure, make sure it is sound. Also, we'll be opening it up to the public. A lot of people want to go fishing, crawfishing, you know, the normal day-to-day things."

Two Japanese sisters have been confirmed as the world's oldest living identical twins and the oldest ever identicalā€twitter.com/i/web/status/1ā€¦4H
cnni

10:01 pm ET September 25, 2021 RETWEET
Australia has lost about 30% of its koalas over the past three years, with the marsupials hit by drought, bushfiresā€twitter.com/i/web/status/1ā€¦VF
cnni

8:31 pm ET September 25, 2021 RETWEET
"The Wire" creator David Simon says he won't be filming an upcoming HBO series in Texas due to a controversial aborā€twitter.com/i/web/status/1ā€¦vP
cnni