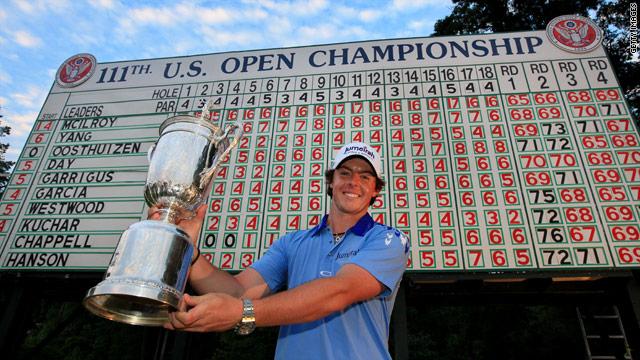 The 22-year-old from Northern Ireland became the U.S. Open's second youngest champion since World War II when he ran away from the competition over the weekend, posting the lowest four-day total in U.S. Open history, besting Tiger Woods' record set in 2000.

McIlroy's feat is even more impressive after he had a well-documented collapse on the final day of the Masters, costing him the coveted green jacket, which is given to the winner of the famed golf tournament. As one of the games biggest tweeters, McIlroy was noticeably absent the week leading up to the U.S. Open. However, on Sunday, he tweeted a photo of the U.S. Open trophy as well as two words that sum up the weekend: #winning #bounceback.

The private investigator, and founder of UtahDetective.com, is credited with finding Max Melitzer, a homeless man who had inherited a large sum of money. Lundberg was hired by Melitzer's family to find him and hopefully get him back to his hometown in New York. He found Melitzer over the weekend after receiving a tip from the head of the homeless mission in Salt Lake City as well as someone who heard the story on a local radio station.

"I want to make sure we get him back to New York, hopefully with his family. Get him in a situation where he has a decent place to live, food, pay his medical costs," Lundberg told the Deseret News. "He can get on with his life and enjoy himself for a change."

The University of Arizona student is heading to Israel to protest Israel's blockade of Gaza. Schivone is a member of the group, No More Deaths, and sees a direct correlation between what's going on along the U.S.-Mexico border and the Israel-Gaza border. He will be on an American ship alongside nine other ships that will attempt to challenge the blockade.

"The situation on the border and the situation in Gaza is not going to end without civic engagement and civil resistance," Schivone told the Arizona Republic. His trip is not without controversy, as the counsel general of Israel in Los Angeles, Jacob Dayan, said the flotilla will be committing an "act of provocation" by attempting to go through the blockade. Dayan also is accusing the group of being organized by Hamas, which the United States and Israel consider a terrorist organization. Schivone told the Arizona Republic that he hopes the flotilla will create "a huge political storm and discussion."

6:11 am ET January 30, 2023 RETWEET
Adani Group has published a detailed rebuttal running to more than 400 pages against allegations of fraud made by a‚Ätwitter.com/i/web/status/1‚Ä¶A0
cnni

6:00 am ET January 30, 2023 RETWEET
Eight people were killed and three wounded after two gunmen entered a home and opened fire on a group of people cel‚Ätwitter.com/i/web/status/1‚Ä¶en
cnni

At least 17 are dead and 83 injured after a blast inside a mosque mostly attended by law enforcement officials in P‚Ätwitter.com/i/web/status/1‚Ä¶OP
cnnbrk