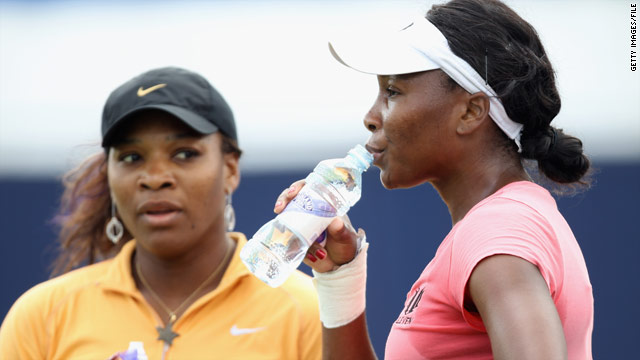 First day of Wimbledon - There's no shortage of storylines this year at Wimbledon. High on that list, as usual, are the sisters Williams. Venus and Serena hold nine Wimbledon titles between the two of them, but observers are still trying to determine if Serena is rusty or if the Williams sisters are "the ones to beat" at the grass-court tournament. Never mind that Denmark's Caroline Wozniacki is the top seed.

There's also the continuing saga of Serbia's Novak Djokovic and Switzerland's Roger Federer. The No. 3-seeded Federer snapped a historic winning streak by the No. 2-seeded Djokovic at the French Open two weeks ago. Now Federer is importing a little smack talk into the mix, saying, "I know I can beat Novak on any surface. ... I've done that in the past. Just because he's on a great winning streak doesn't mean he's unbeatable."

As for the No. 1 seed, Spain's Rafa Nadal is taking a different tack from Federer and playing down the chances of snaring his 11th Grand Slam title.

Religious gangs blamed - Syrian President Bashar al-Assad blamed armed gangs for the widespread violence in his country, saying Monday such groups have tarnished Syria's image and weakened its security. He also accused the gangs of wanting foreign intervention in Syria. "There are those who are killing the name of religion and want to spread chaos under the pretext of religion," al-Assad said.

Al-Assad faces increasing criticism from the United States, Europe and others over his government's crackdown on demonstrations. Monday marked the president's third address since the protests began in March. The speech came a day after a YouTube video reportedly showed dozens of children calling for freedom and hoisting anti-government signs in two Syrian cities. CNN cannot independently verify the authenticity of the videos.

The president's speech also comes as the U.N. refugee agency says more than 43 million people have been displaced worldwide by conflict or natural disaster, including in Syria, Sudan and Libya.

In recent days, thousands have fled to refugee camps along the Syria-Turkey border. A woman who identified herself as Nour told CNN she fled to the camps because she believed she would die if she stayed in Syria.

Congress to cut Libya dollars? - Despite a victorious "golf summit" over the weekend, House Speaker John Boehner and President Barack Obama may not play so well together when it comes to the mission in Libya. Sunday marked the 90th day of the campaign, and Boehner has threatened to defund the military when Congress considers a defense appropriation bill this week.

The War Powers Resolution gives the president 60 days to get congressional approval for sending U.S. forces to war and another 30 days to end hostilities. The White House, however, is standing firm, saying the U.S. is playing a supporting role in the Libya mission and isn't engaged in "hostilities" and that Obama doesn't need congressional approval.

If Boehner pursues closing the purse, he will have to do it without two key GOP senators. Sens. John McCain of Arizona and Lindsey Graham of South Carolina said Sunday they oppose House Republican efforts to cut funding for the mission.

Michelle Obama in Africa - First lady Michelle Obama kicks off her official trip to southern Africa on Monday, focusing on youth leadership and education. She will make stops in South Africa and Botswana during the weeklong visit. She will also highlight the benefits of education and wellness and urge youth on the continent to be part of the national dialogue, according to the White House, which says the trip is part of Obama's continuing effort to engage young people, especially girls and young women.

The first lady will meet with South African President Jacob Zuma in Pretoria before traveling to Johannesburg and Cape Town, where she is scheduled to take a tour of an apartheid museum with ex-President Nelson Mandela's wife, Graca Machel. Obama also will visit Robben Island, where Mandela was detained for years during the apartheid struggle.

@WFKARS What is your address? I'm coming over!!!
sarasidnerCNN

10:20 am ET April 17, 2021 RETWEET
TO ALL JOURNALIST working protests in #Brooklyncenter. Print this out and keep it with you. twitter.com/webster/statusâ€¦
sarasidnerCNN

10:09 am ET April 17, 2021 RETWEET
Here's the order of service for the funeral of Prince Philip, the late husband of Britain's Queen Elizabeth II, nowâ€twitter.com/i/web/status/1â€¦lN
cnni

10:07 am ET April 17, 2021 RETWEET
@Trandyw5 @JordanChariton @CNN I am sorry that happened to you Jordan. BUT I did not say that police don't arrest jâ€twitter.com/i/web/status/1â€¦SW
sarasidnerCNN

10:02 am ET April 17, 2021 RETWEET
Her Majesty The Queen has now arrived at St. George's Chapel and entered through a side door. The entire processionâ€twitter.com/i/web/status/1â€¦RP
cnni