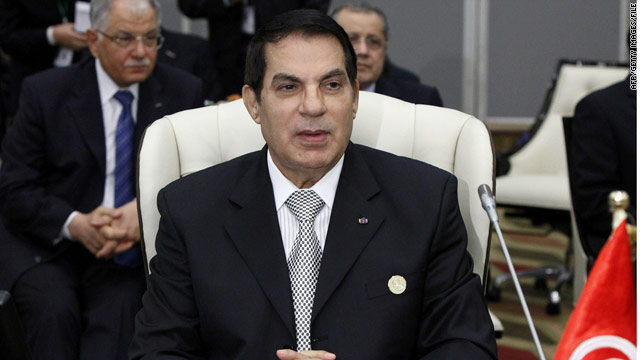 A Tunisian court sentenced ousted President Zine el Abidine Ben Ali and his wife to 35 years in prison in absentia on Monday after a one-day trial on corruption charges.

Ben Ali (pictured) and his wife, Leila Trabelsi, have been living in exile in Saudi Arabia since the January revolt that ended his 23-year rule and touched off a wave of uprisings across North Africa and the Middle East. In addition to the prison term, the court imposed a fine of 91 million dinars ($65 million).

The trial began Monday morning in a packed courtroom in Tunis, and a verdict and sentence were handed down Monday night. Ben Ali and Trabelsi were represented by a team of court-appointed Tunisian lawyers.

A huge, 12-pointed star has been installed on top of one of the towers of Antoni Gaud√≠'s famous Sagrada Familia cat‚twitter.com/i/web/status/1‚Ä¶gFP
cnni

5:15 am ET December 5, 2021 RETWEET
From London's Hyde Park Winter Wonderland to the Winter Village in New York, here's a rundown of the Christmas mark‚Ätwitter.com/i/web/status/1‚Ä¶lf
cnni

5:00 am ET December 5, 2021 RETWEET
Art has always had the power to be dangerous. But a newly opened art museum is taking that to another level. cnn.it/3pLgcr1
cnni