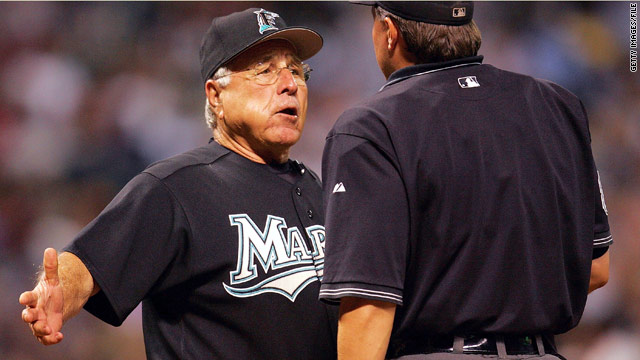 Welcome back to Miami, Jack McKeon. On Sunday, Marlins manager Edwin Rodriguez resigned just before the team was to take on the Tampa Bay Rays. The Marlins had kicked off June with a 1-17 mark and a nine-game losing streak (10 with their 2-1 loss to Tampa Bay).

SI.com's Jon Heyman reports that McKeon, who helped the team claim the 2003 World Series title, was offered the job. But what prompted Rodriguez to make an abrupt exit? Given a one-year contract with low pay under an owner notorious for axing managers, Rodriguez's exit might not be all that surprising.

"Rodriguez was 78-85 as manager since taking over for Fredi Gonzalez in late June 2010," SI.com's Joe Lemire wrote. "One has to imagine that, if Rodriguez had a longer-term contract or if he worked in a more stable environment, he might have stuck around longer before turning in his resignation."

North Carolina Tar Heels vs. Texas Longhorns (2 p.m., ET) – UNC and Texas will battle it out in an elimination game at Omaha’s TD Ameritrade Park on Monday afternoon.

3 - Number of spots No. 11 driver Denny Hamlin moved up after winning his first race of the season Sunday at Michigan International Speedway. SI.com's Tim Tuttle looks back at the race in his Five Things.

7 - Number of consecutive games the Minnesota Twins have won. Their seventh came at Target Field Sunday when they beat the San Diego Padres 5-4.