The arrest of a man in connection with the murder of teacher Sabina Nessa is a "significant development" in the casā€twitter.com/i/web/status/1ā€¦eX 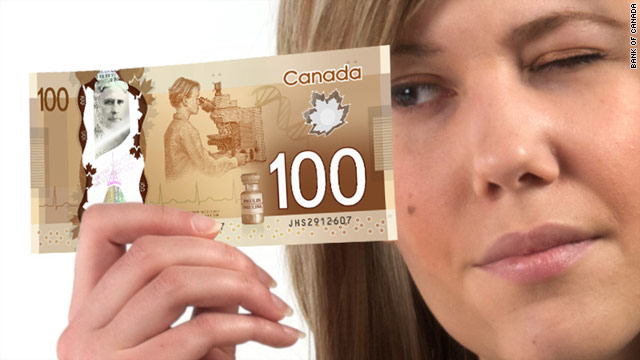 The new polymer Canadian $100 bill has security features that make it hard to counterfeit but easy to verify.
June 21st, 2011
02:51 PM ET

Canadian cash to do away with paper

"Paper or plastic?" That question isn't asked frequently at grocery stores anymore, but it may be poised for a comeback - at Canadian banks.

The Bank of Canada will start issuing high-tech currency made of polymers instead of the traditional cotton paper and featuring transparent windows (one shaped like a maple leaf) to frustrate counterfeiters.

Security and verification features include raised ink in the numerals and the featured portrait, color-shifting images embedded in the large window, and a number hidden in the maple-leaf window.

"Our mandate at the Bank of Canada is to make sure Canadians can use these notes with confidence," bank spokeswoman Julie Girard said.

For the next six months, the Bank of Canada will work at educating the public and businesses on the new notes. It will also inform retailers, financial institutions and law enforcement agencies about how to check the new security features, the bank said in a statement.

The new bills will be the same size and colors as current bills (though thinner and lighter). They can be folded and carried in a wallet, though they can't be creased and will return to their original shape, Girard said. For carrying loose bills in one's pocket, a money clip might be a good idea, she advised.

The polymer currency will be more durable than itsĀ  paper predecessor, Girard said.

Their resistance to crinkling and becoming limp like paper bills will make the new notes easier and more efficient to process, she said. For example, they won't be rejected by vending machines because of bent corners and they will stack neatly for counting machines.

The new bills cost almost twice as much to produce but are expected to last 2.5 times as long, Girard said. Their lighter weight also will cut transportation costs, and the Bank of Canada intends to recycle them when they wear out, providing another environmental benefit, she said.

As before, the new bills will be color-coded and have tactile features to help visually impaired people distinguish one denomination from another.

About 30 other countries already use polymer notes for some or all of their currency, Girard said.

Australians accepted their polymer bills and consider them more hygienic than paper ones, according to polymernotes.org. The Reserve Bank of Australia also reported it needed to devote fewer resources to checking the authenticity of the more secure notes.

3:19 am ET September 27, 2021 RETWEET
27-year-old Nathan Paulin walked a 600-meter slackline from the Eiffel Tower to the other side of the Seine river iā€twitter.com/i/web/status/1ā€¦0D
cnni

2:45 am ET September 27, 2021 RETWEET
Japan's Princess Mako is set to forego a one-off million-dollar payment for giving up her royal status to wed a colā€twitter.com/i/web/status/1ā€¦rb
cnni

2:35 am ET September 27, 2021 RETWEET
People with a higher consumption of dairy fat have a lower risk of cardiovascular disease than those with low intakā€twitter.com/i/web/status/1ā€¦p9
cnni