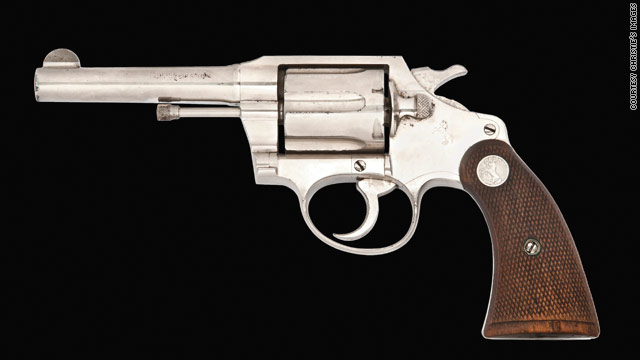 Eliot Ness would probably be a little annoyed to see his nemesis's revolver drawing six-figure bids.

The Prohibition agent of "Untouchables" fame spent about two years trying to nail Al Capone and his murderous cabal, only to see the Chicago gangster dodge charges of smuggling, bootlegging, prostitution or, if we're pointing fingers in the 1929 St. Valentine's Day Massacre (we aren't), much worse.

Capone eventually went down on tax evasion charges stemming from a separate investigation. The seven years and change that the mobster spent in prison ultimately were his undoing; he died about seven years after his 1939 release.

Now, more than six decades following Capone's death, one of his belongings is drawing the cult fascination that so often accompanies the appurtenances of gangsters, psychos and other monumental miscreants.

Christie's expects the winning bidder to cough up between $80,600 and $112,840. Hardly an offer you can't refuse. A similar firearm sans the Scarface pedigree would run you a few hundred dollars.

Scarface, at his 1931 tax evasion trial.

In a world where U.S. marshals snap up a quarter-mil selling the Unabomber's stuff and where Charles Manson's artwork and serial killer John Wayne Gacy's clown paintings pull mad scratch, is anyone surprised? Murderauction.com and serialkillersink.com are viable business opportunities, after all.

The auction listing for the Brooklyn-born mob boss's pistol says that Madeleine Capone Morichetti, wife of Capone's brother, Ralph, explained in a 1976 letter to Edmund Koeski that Ralph "Bottles" Capone wanted Koeski to have the gun upon Bottles' death. The letter further described the weapon as "a gun which previously belonged to and was used only Al Capone while he was alive."

Morichetti also stated in a 1990 affidavit, which cites the gun's serial number, that Bottles got the gun from his little brother.

So, it's the genuine article, Christie's is saying.

The auction house opens bidding on the gat Wednesday in London. This would make a fine addition to the decor of any local speakeasy.

This weather reporter got caught in an on-air graphics error that "multiplied" her across the screen‚Ätwitter.com/i/web/status/1‚Ä¶ep
cnni

1:01 am ET May 14, 2021 RETWEET
A woman who's never been to Ireland wakes up with an Irish accent. CNN's Jeanne Moos reports.‚Ätwitter.com/i/web/status/1‚Ä¶S8
cnni