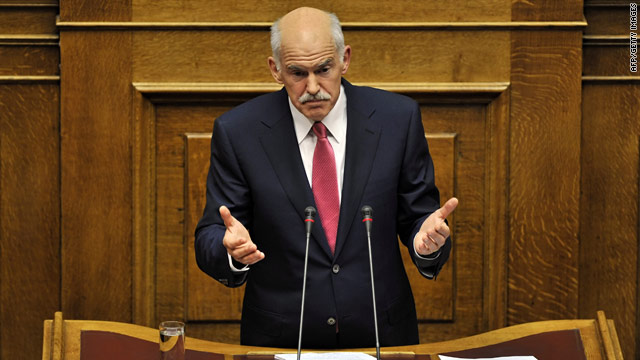 International lenders have demanded Greece cut spending, lay off public workers, raise taxes and raise 50 billion euros ($71 billion) through selling off state-owned enterprises in exchange for a bailout of the cash-strapped nation. Vehement protests against the austerity measures spurred Papandreou (pictured) to shake up his government last week, leading to Wednesday's 155-143 vote.

Lawmakers are slated to vote on the privatization plan and further tax increases, pension cuts and layoffs on June 30. European Commission President Jose Manuel Barroso told CNN on Tuesday that Greece risks being abandoned by both Europe and the International Monetary Fund if it fails to act.

10:31 pm ET January 23, 2020 RETWEET
It's the busiest time of the year for So Man-fung Peter, one of the most famous geomancy consultants in Hong Kong.ŌĆtwitter.com/i/web/status/1ŌĆ”yE
cnni

10:31 pm ET January 23, 2020 RETWEET
The three Americans who died fighting an Australian bushfire from the air have been identified by their employer: CŌĆtwitter.com/i/web/status/1ŌĆ”vI
cnni