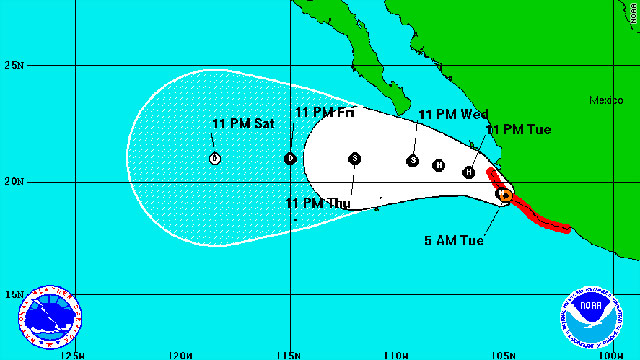 The Category-1 storm, however, was moving away from the coast, heading northwest at 13 mph (20 kph), according to the National Hurricane Center. As of Tuesday morning, Beatriz was about 50 miles northwest of Manzanillo, Mexico, though its effects were felt up and down the coast, even outside of the hurricane warning area, where rough waves were a concern.

The hurricane was expected to create "storms, strong winds, high waves and intense to torrential rains in (the states) of Colima, Michoacan and Guerrero," Mexico's National Meteorology Service said.

Flooding and mudslides were possible, the service said.

Tourist hotspots including Acapulco and Zihuatanejo were among those seeing effects of the storm, where 6-12 inches of rain were predicted.

Now at the protest outside the Brooklyn Center police precincttear gas fired by police . Water bottles being thrownâ€twitter.com/i/web/status/1â€¦Rj
sarasidnerCNN

10:19 pm ET April 12, 2021 RETWEET
'Getting a clearer picture': Black Americans on the factors that overcame their vaccine hesitancy nbcnews.com/news/nbcblk/geâ€¦
susancandiotti

9:00 pm ET April 12, 2021 RETWEET
A huge statue of Jesus Christ is under construction in southern Brazil, and it will be even taller than its famousâ€twitter.com/i/web/status/1â€¦nT
cnni