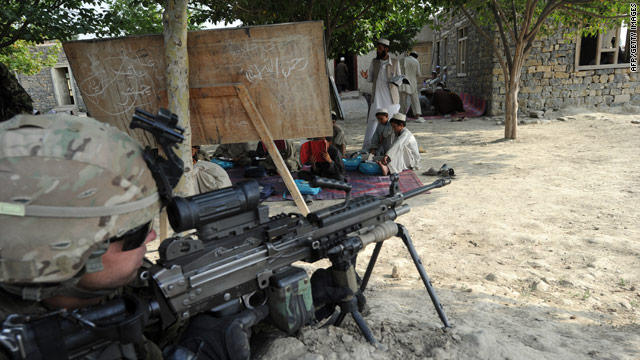 A U.S. soldier takes up a position near schoolchildren Tuesday in Afghanistan's Khost province.
June 21st, 2011
08:47 AM ET

Afghanistan drawdown - President Barack Obama will announce Wednesday how many U.S. troops he'll bring home from Afghanistan when the drawdown begins next month. Obama is expected to announce the approval of a plan that would result in 30,000 U.S. "surge" forces being withdrawn by the end of 2012, an administration official told CNN. There are about 100,000 U.S. troops serving in Afghanistan, including the so-called surge ordered in 2009 in a bid to control violence there.

Huntsman as GOP candidate - Former Utah Gov. Jon Huntsman is set to announce Tuesday his candidacy for the Republican presidential nomination. He's a motorcycle-riding Mormon who speaks fluent Mandarin, a soft-spoken father of seven with eclectic political connections. He was ambassador to China for President Barack Obama, whom he once described as a remarkable leader. That could make the primary season difficult for him.

Greece debt crisis - Greek Prime Minister George Papandreou is set to ask lawmakers to back his new government Tuesday as he tries to push through unpopular budget cuts to get a new international bailout. Heavy debt has pushed Greece's economy to the brink of collapse, which could have echoes across Europe and the globe.

Summer solstice - Although it's been plenty hot in most of the U.S. for weeks now, summer officially begins in the Northern Hemisphere at 1:16 p.m. ET Tuesday. That's the moment when the sun is directly over the Tropic of Cancer and the Earth's tilt toward the sun is at its maximum.

Casey Anthony trial - Proceedings are expected to resume Tuesday in the Orlando murder trial of Casey Anthony, a day after the judge halted it to quell what he called "gamesmanship" between the prosecution and defense. Anthony is charged with killing her 2-year-old daughter, Caylee, in 2008.

Arizona wildfires - Nearly two weeks after the biggest wildfire in Arizona history swept through their community and obliterated dozens of homes, barns, sheds and one truck, residents of the tiny town of Greer are back in their homes. Firefighters are gaining on the blaze, which has torched more than a half-million acres in eastern Arizona. Firefighters announced late Monday that the blaze is 56% contained. Weather conditions are expected to improve with calmer winds and higher humidity levels Tuesday, making it easier for crews to battle other active wildfires burning across the state.

Cybersecurity hearing - Audacious cyber-attacks in the last few months have fit two profiles: efforts at disruption by political activists or attempts by governments, companies or thieves to steal valuable information. Recent targets include Lockheed Martin, Sony, the International Monetary Fund, Citibank, the U.S. Senate, Sega and on Monday the CIA. A Senate committee is set to hold a hearing on the problem Tuesday morning.

Wimbledon rematch - Remember that tennis match last year at Wimbledon that went on for three days? The record-setting duel between American John Isner and Frenchman Nicolas Mahut went on for so long that the scoreboard stopped working. Well, get comfortable: Isner and Mahut are set to meet again Tuesday in the first round of this year's tournament.

China flooding - At least 175 people are dead and more than 1.6 million people have been evacuated from massive flooding in China. The country's Ministry of Civil Affairs said the direct economic losses have reached 35.02 billion yuan ($5.4 billion).

Russia plane crash - Investigators are working to determine what caused the crash of a Russian jetliner Monday. The crash killed 44 people and injured eight; the plane's flight data recorder has been recovered.

Chile volcano - An ash cloud drifting around the world for a second time after spewing from a Chilean volcano more than two weeks ago is once again grounding commercial jets and stranding thousands of passengers in Australia.

6:22 pm ET November 25, 2022 RETWEET
It‚Äôs a draw!!!! US must beat Iran on Tuesday to advance to 16th Round ‚Äî-United States earns draw against favored twitter.com/i/web/status/1‚Ä¶XtZ12g
susancandiotti

3:36 pm ET November 23, 2022 RETWEET
In recent interview, Pence said he didn‚Äôt think it was appropriate for him to testify before Jan 6 cmte. Interestitwitter.com/i/web/status/1‚Ä¶wadO
susancandiotti

6:22 pm ET November 25, 2022 RETWEET
It‚Äôs a draw!!!! US must beat Iran on Tuesday to advance to 16th Round ‚Äî-United States earns draw against favored twitter.com/i/web/status/1‚Ä¶XtZ12g
susancandiotti

3:36 pm ET November 23, 2022 RETWEET
In recent interview, Pence said he didn‚Äôt think it was appropriate for him to testify before Jan 6 cmte. Interestitwitter.com/i/web/status/1‚Ä¶wadO
susancandiotti