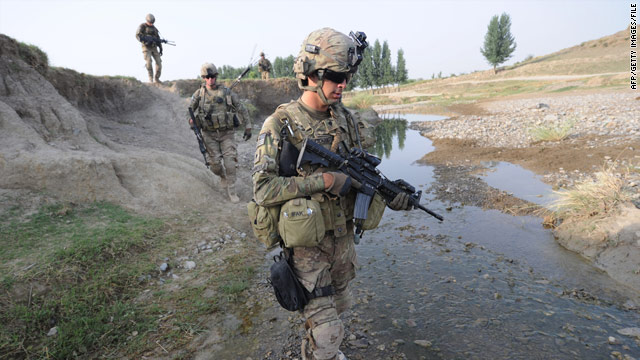 [Updated at 9:06 a.m. ET] President Barack Obama is presently mulling how many troops to bring home this summer and how many to bring home late next year, a source says.

He is expected to discuss preserving flexibility in force levels on the ground so commanders can adjust as conditions warrant, an administration official said.

The drawdown will involve both bringing troops home without replacing them as well as canceling some proposed deployments.

Bringing the troops home by late 2012 would give U.S. forces another two fighting seasons before coming home, sources say.

Nearly three-quarters of Americans polled this month said they support the United States pulling some or all of its forces from Afghanistan, and the figure has jumped 10 points since May, likely as a result of Osama bin Laden's death, pollsters said.

[Posted at 8:47 a.m. ET] President Barack Obama is expected to announce the approval of a plan that would result in the 30,000 U.S. "surge" forces being withdrawn completely from Afghanistan by the end of 2012, an administration official said.

An estimated 100,000 U.S. troops are serving in Afghanistan, and about 30,000 of them were part of the 2009 surge, aimed at snuffing rising violence in the country.

Obama had previously said those troops would begin coming home in July and indicated the number would be "significant."

The president has expressed confidence that the U.S. can meet a self-imposed deadline to bring U.S. troops back from Afghanistan without compromising Afghan security. Military commanders and government officials, however, have raised concerns about the readiness of Afghan security forces.

The White House said Monday that Obama is scheduled to give a speech on the withdrawal on Wednesday.

An unusual fish with teeth as sharp as glass and a body shaped like a football washed ashore on a California beach‚Ätwitter.com/i/web/status/1‚Ä¶80
cnni

1:52 am ET May 12, 2021 RETWEET
One of the Earth's longest-flying spacecraft has detected a "persistent hum" beyond our solar system, according to‚Ätwitter.com/i/web/status/1‚Ä¶Dx
cnni

1:31 am ET May 12, 2021 RETWEET
"The deals are symbolic of how China and Russia's international vaccine goals are increasingly aligned, as they ass‚Ätwitter.com/i/web/status/1‚Ä¶cE
cnni

1:01 am ET May 12, 2021 RETWEET
This manicure embeds a microchip into your fingernails -- and can be used as a contactless solution to business car‚Ätwitter.com/i/web/status/1‚Ä¶bF
cnni