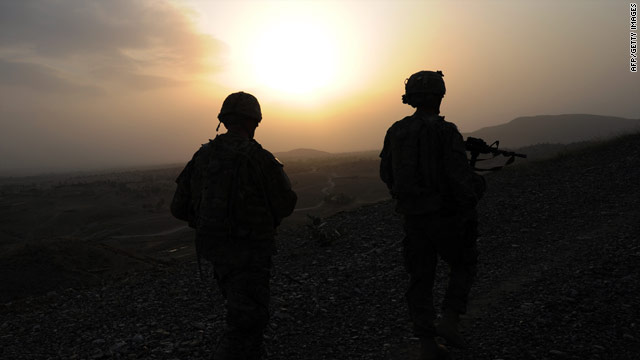 Afghan troop withdrawal - President Barack Obama will deliver a highly anticipated speech on the U.S. troop drawdown in Afghanistan at 8 p.m. ET Wednesday. He is expected to announce that 30,000 U.S. "surge" forces will be fully withdrawn from Afghanistan by the end of 2012, an administration official said. Obama has been mulling how many troops should be withdrawn this summer and by the end of the year. The president is expected to stress the importance of preserving flexibility in force levels on the ground so commanders can adjust as conditions warrant, the official said.

Resolutions on Libya campaign - House Republicans will meet Wednesday to discuss further a pair of resolutions involving the U.S. role in the international military campaign in Libya. One would be the same as a Senate resolution introduced by bipartisan senators who support the mission, and the other would limit U.S. involvement in the mission to a noncombat role while allowing many of the same functions being performed now by U.S. forces to continue. Sens. John Kerry, D-Massachusetts, and John McCain, R-Arizona, introduced a resolution Tuesday expressing support for limited American involvement in the NATO-led military campaign.

North Dakota flooding - Record flooding along the Souris River is expected to overwhelm levees in the Minot, North Dakota, area. Mayor Curt Zimbelman said all residents and businesses must vacate designated evacuation zones by 6 p.m. CT Wednesday. The evacuation order covers about a third of the community's population, an official says.

Wildfires - Dozens of wildfires are burning in spots across the United States, including Arizona, New Mexico and Florida. A mandatory evacuation order is in place for 1,800 residents and businesses in Grimes County, Texas, due to a fast-moving wildfire there.

Casey Anthony trial - Prosecutors in the Casey Anthony murder trial are looking into a woman who at one point was incarcerated with Anthony and whose child died in a way similar to how Anthony's defense says her 2-year-old daughter Caylee died. The prosecution says the information could become relevant to the case, suggesting the possibility that Anthony may have borrowed her fellow inmate's story. Orange County Chief Judge Belvin Perry Jr. told jurors the trial will go only until about noon Wednesday.

Australia ash cloud - An ash cloud from a Chilean volcano thinned over Australia on Wednesday, freeing commmercial airliners to take to the skies after grounding them this week. Qantas resumed domestic flights, and international service began again from Sydney and Melbourne. However, trips across the Tasman Sea to and from New Zealand remain canceled indefinitely. Virgin Australia also said its New Zealand flights were canceled.

6:01 pm ET August 2, 2021 RETWEET
The top Democrat on the US Senate Foreign Relations Committee and his counterparts from eight European countries slâ€twitter.com/i/web/status/1â€¦VP
cnni

5:28 pm ET August 2, 2021 RETWEET
If you casually asked most physicists about the best angle to throw a javelin, weâ€™d all say 45Â° from horizontal. Btwitter.com/i/web/status/1â€¦6XMHT
cnni

5:08 pm ET August 2, 2021 RETWEET
Greenland just had its most significant melting event of the year, shedding enough water to cover the state of Florâ€twitter.com/i/web/status/1â€¦j3
CNNweather