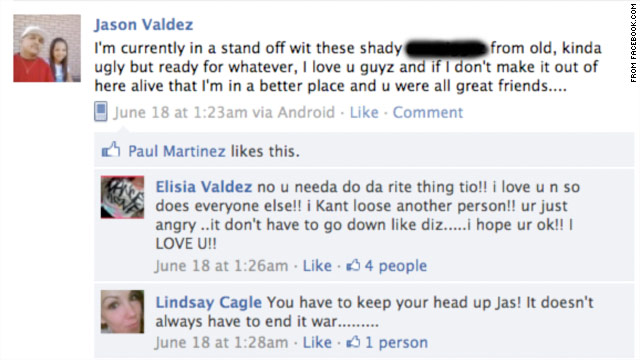 Police say Jason Valdez made posts to his Facebook wall while he was in an armed standoff with them.
June 22nd, 2011
07:18 PM ET

The Ogden, Utah, Police Department says an armed man posted Facebook status updates from his phone while engaged in a 16-hour standoff with them over the weekend.

Jason Valdez, 36, issued six status updates, added 15 friends and responded to numerous comments posted by worried family and friends while police were engaged in a siege at an Ogden motel Saturday morning. Police say the person in the standoff and the person making those updates was Valdez.

"I'm currently in a stand off wit these shady [expletive] from old, kinda ugly but ready for whatever, I love u guyz and if I don't make it out of here alive that I'm in a better place and u were all great friends," Valdez posted at 1:23 a.m. via an Android phone.

The incident started when police officers attempted to serve a felony warrant for failure to appear in court on a drug-related charge and Valdez barricaded himself in the motel room, Ogden police Lt. Danielle Croyle said.

Police said a woman was with Valdez in the motel room; police characterized her as a hostage but Valdez implied she was a willing companion. At 4:04 a.m., Valdez uploaded photos of himself and a woman with the caption, "Got a cute "HOSTAGE", huh?"

Various relatives and friends urged him throughout the morning to be careful, "keep yr head up," "do the right thing" and "end this peacefully." Some even tipped him off about police movements outside the motel.

Police were keeping an eye on Valdez's online accounts, and those helpful friends could face obstruction charges, Croyle said. It's becoming more common for criminals to use social media even in the midst of dangerous situations, she said.

"It can be detrimental to the operation in that we are trying to have his attention in dealing with the situation and dealing with tactics," Croyle said. "Our ultimate goal is for a peaceful resolution."

At 5:26 a.m., Valdez thanked those who were supporting him: "Much love to u krazy fools too and I told u I was dumping on these [expletive] lol show u how them NORTENOS do it"

The Nortenos are a criminal street gang to which Valdez belongs, Croyle said.

Two hours passed before he issued this ominous update, apparently using a different device: "Well everyone im letting Veronica go here real soon but this is the end"

Someone calling herself Brittney Navarro advised Valdez: "we love u jason, hope u thought about the decision ur making."

Navarro did not respond to a CNN request for an interview.

At 9:25 a.m., Valdez issued his final update: "Well i was lettin this girl go but these dumb bastards made an attempt to come in after i told them not to, so i popped off a couple more shots and now were startin all over again it seems"

Croyle said that SWAT officers burst through the wall from the adjoining room. Valdez then shot himself in the chest, Croyle said. Police did not fire a shot, and the woman who had been in the room with Valdez was not harmed, Croyle said.

Charges had not been filed as of Wednesday afternoon. The woman was released and has not been charged.

In the hours and days following the incident, many Facebook users took advantage of Valdez's Facebook page, which is not private, to post harsh criticisms of Valdez and his supporters. "I hope he dies" was one of posts.

Valdez's aunt, Tami Noriega, said Valdez has always been troubled and unhappy and most people don't know about his better qualities.

"Putting aside all the trouble he's been in his whole life, there is a good side to Jason," she said. "He does have a heart of gold. What he did (Saturday) and all the things he's done, they're his bad things; he's never (dragged) a family member into his trouble."

Noriega said Valdez has five children. She said no family members other than his mother have been allowed to visit him in the hospital, where he is in intensive care.

"It's not an easy thing to not know from one minute to the next what's going to happen to him," Noriega said, breaking into tears. "... He's never felt like he's had his place. And people don't know what (good things) he's done, they only know the bad."

10:16 pm ET April 14, 2021 RETWEET
The police chief of Windsor, Virginia, said a traffic stop in which two officers pointed guns at a US Army officer,â€twitter.com/i/web/status/1â€¦55
cnni

9:48 pm ET April 14, 2021 RETWEET
Starting in September, Uber will shift to a "hybrid model" for its employees "with a clear expectation that they alâ€twitter.com/i/web/status/1â€¦kA
cnni