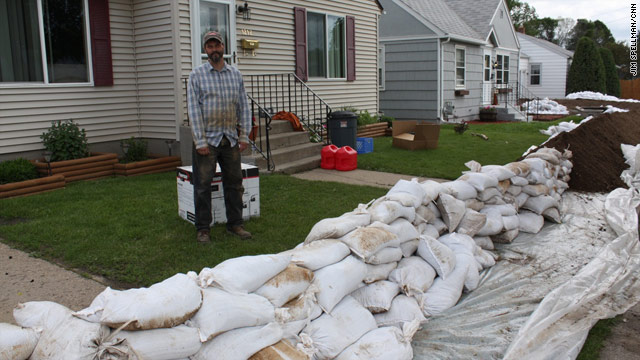 [Posted at 1:52 p.m. ET] Residents in Minot, North Dakota, appear resigned to face major flooding as water has now begun flowing over the city's dikes, which are leaking in some places.

Mayor Curt Zimbelman told a local radio station at about 11 a.m. local time (noon ET) that he expects the evacuation alarms to sound within the hour. There are roughly 12,000 people in the evacuation zone in and around Minot.

Residents in the community have been given until Wednesday evening to evacuate because of what state Emergency Services spokeswoman Cecily Fong called "historic proportions of water." There are also concerns that the Souris River may be rising more rapidly than expected, Fong said.

The National Weather Service predicted record flooding as heavy area rains and dam releases cause the river to swell at Minot.

The Souris River, which locals call "The Mouse" after the French translation, flows through the center of town, and there are several homes and businesses along its low-lying banks.

Fearing the main levees won't hold back the waters, emergency workers have begun constructing local levees around a school and the Broadway Street bridge, a main thoroughfare in town.

Residents appear to be heeding evacuation warnings. In a sign that they're taking the flooding seriously, some residents are pulling up carpets because it will be easier to remove now than it will be after their homes are inundated with water.

Troy Erickson, 44, a lifelong North Dakota resident who has lived in Minot since 1995, lives across the street from the perimeter of the evacuation zone and said he plans to ride out the storm.

His neighbor has a bucket loader, and they have distributed several loads of sand and gravel around four houses, which are home to 13 people, he said. They have "lowered a couple hundred sandbags" on top of the mixture, he said.

"We've got more sandbags coming to have just in case we need to build it higher," Erickson said. "It if happens, it happens."

He said he's "a little bit" frightened because he's never been in this situation before, though he was a toddler during the flood of 1969.

After months of lockdown, parts of Southeast Asia are leaving behind their "zero-Covid" policy and charting a pathâ€twitter.com/i/web/status/1â€¦iB
cnni

10:26 pm ET September 21, 2021 RETWEET
"A human-rights catastrophe has taken shape on the border in Texas -- and it has happened on the Biden administratiâ€twitter.com/i/web/status/1â€¦FK
cnni

10:08 pm ET September 21, 2021 RETWEET
"Perhaps with the recent case of a Texas doctor being sued at least twice after he said he violated the law ... weâ€twitter.com/i/web/status/1â€¦v7
cnni

9:54 pm ET September 21, 2021 RETWEET
Boris Johnson has finally admitted that he has six children, a question he has previously dodged in numerous intervâ€twitter.com/i/web/status/1â€¦fM
cnni

9:39 pm ET September 21, 2021 RETWEET
An Ohio Senate candidate who pushed strong anti-refugee messages against Afghans and others is the grandson of refuâ€twitter.com/i/web/status/1â€¦6e
cnni