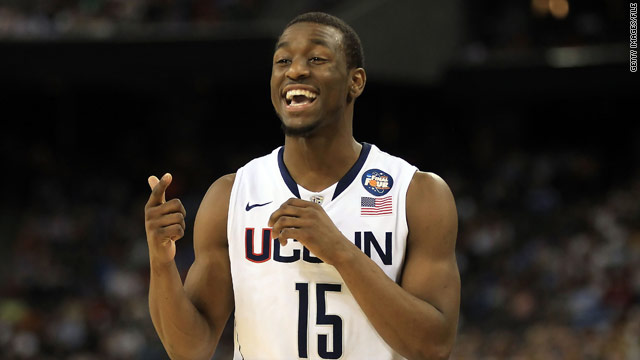 With just hours before the 2011 NBA Draft kicks off in New Jersey's Prudential Center, speculation continues about the fate of this year's class. Will Jimmer Fredette experience a major falloff in the pros? Will Kemba Walker be able to mold his skill set into one that is valuable in the NBA?

SI.com's Seth Davis offers up a collective scouting report on 40 of this year's draft prospects. Player breakdowns include:

- "Kyrie Irving, 6-4 freshman point guard, Duke. Just a great kid. He has only an 11-game body of work, but he has an incredible ability to get in the lane. He's a pass-first point guard, but he can also score. He's not a freak athletically like Derrick Rose or Russell Westbrook. His game is more of the Chris Paul variety, but I don't know if he'll be that good. His lateral mobility is probably his biggest question."

- "Kemba Walker, 6-1 junior point guard, UConn. People seem to have him in pretty high company, but I don't see that. I think he's a backup, so how do you take a backup in the top 10? He reminds me of Ben Gordon, and not in a good way. I see him as a point guard, and that's the problem: When your point guard is leading you in shot attempts, you wonder if he's Allen Iverson or Brandon Jennings. Those aren't winning point guards; they're just small guards who can score."

Virginia Cavaliers vs. California Bears (7 ET) -Â  The Cavs and Bears will face off tonight in a College World Series elimination game.

77th - Minute during which Clint Dempsey scored the lone goal in the U.S. Gold Cup match against Panama. The U.S. will now face Mexico in Saturday's championship match in Pasadena, California.

9 - Number of runners the North Carolina Tar Heels left on base during their 5-1 loss against the Vanderbilt Commodores in the College World Series.

3 - Number of home runs Chris Heisey hit in the Cincinnati Reds' 10-2 home win over the New York Yankees during a doubleheader. The first game went to the Yankees, 4-2.