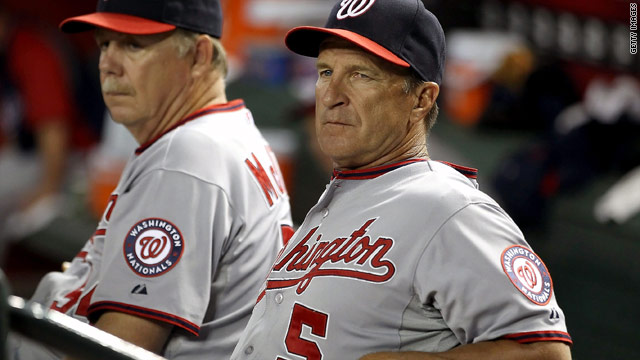 Washington Nationals' Riggleman out as manager

Jim Riggleman has resigned as manager of the Washington Nationals over contract issues, the team said Thursday on its website.

Quoting Riggleman's manager Burt Rocks, the team said Riggleman was upset the ballclub "didn't pick up the option year in his contract."

Riggleman's departure marks the second time this week a National League East manager has stepped down.

Marlins manager Edwin Rodriguez resigned Sunday after his team lost 17 of its first 18 games in June.

Riggleman leaves Washington during a hot streak. The third-place Nationals were 11 -1 in their last 12 games and one game over .500, beating the Mariners 1-0 Thursday.

An interim manager has not been named, the Nationals said.