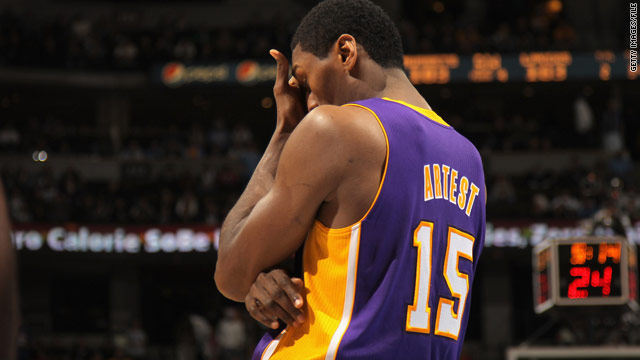 If a Los Angeles County court approves a name-change request, the back of this jersey will read "World Peace" next year.
June 24th, 2011
11:52 AM ET

Kareem Abdul-Jabaar and Ahmad Rashad did it for religious reasons. Chad Ochocinco did it because he's funny, loves attention and doesn't know Spanish too well. Baseball cards companies in the '80s co-opted Rock Raines' and Doc Gooden's nicknames because, we have to assume, Rock and Doc are way cooler names than Tim and Dwight.

Then, there's World B. Free, who once prompted Herb Smith - the cat who correctly thought Dr. J was a better name than Julius Erving - to call out "All-World!" after the Brooklyn baller pulled off a 360-degree dunk ... in junior high. Free would later say he also thought highly of world liberation.

But why would NBA-bad-boy-turned-rapper-model-citizen Ron Artest want to change his name? The answer: Why does Artest do anything?

According to the Los Angeles Times, the Lakers forward has filed paperwork in Los Angeles County Superior Court to dispense with his given name, Ronald William Artest Jr., and adopt the name Metta World Peace. The back of his jersey, then, would read, "World Peace."

Metta has myriad definitions in the Buddhist faith, and they're all warm and fuzzy: benevolence, friendliness, goodwill, nonviolence, fellowship, you get the picture. Artest said on his Twitter feed, "Metta is a Pali word meaning loving-kindness. Metta chanting is the radiation of loving-kindness towards all beings: Super dope!!!"

Pali is the language used in many early Buddhist texts. Artest does not mention if there is a Pali word for super dope.

Outside of that tweet, it's unclear what inspired the name change. When one of his Twitter followers asked him point-blank, Artest responded, "OK Listen It was a long summer day And.... Hold one sec."

That was around 7 a.m. ET. Artest never followed up. His website makes no mention of the name change.

Artest's ex-publicist, who resigned last week, his lawyer and a Lakers spokesman confirmed the news for the Times, but none had insight into the rationale behind it.

Artest is scheduled to appear in court in August for a name-changing hearing, the Times reported.

Some might say World Peace is an ironic nickname for a man whose career includes 60 technicals, 33 foul-outs, 17 flagrant fouls and six ejections, and also includes a starring role in 2004's "Palace Brawl," for which Artest was suspended a record-setting 86 games.

But World Peace may speak more to the new-and-improved Artest, who raffled off his 2010 NBA Championship ring to help youngsters with mental illnesses and who won the NBA's citizenship award for his philanthropy in that field. (And for what it's worth, Artest had only six technicals and one ejection last season.)

You'll soon be able to find Artest's 140-character missives at his new Twitter feed, the player says, though it's difficult to know for sure which Artest account is real. The hoopster explained the conundrum in a tweet to our Don Lemon on Friday morning, "Tell twitter they need to verify me They are lazy They never check emails."