The Department of Veterans Affairs will require many of its frontline health workers to be vaccinated, a senior off‚Ätwitter.com/i/web/status/1‚Ä¶Bm

Civilian casualties in Afghanistan reached record levels in the first half of 2021, the United Nations says in a re‚Ätwitter.com/i/web/status/1‚Ä¶bz

The US wins the men‚Äôs 4x100m freestyle swimming relay at the Tokyo Olympics. It‚Äôs the fifth gold medal for the UStwitter.com/i/web/status/1‚Ä¶PuwGmZ 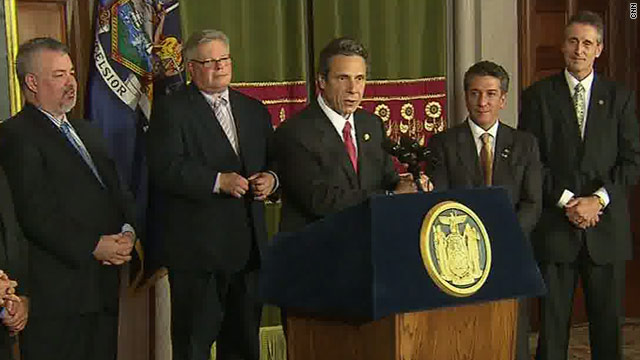 [Update 4:52 a.m.] New York Gov. Andrew Cuomo signed the state's marriage equality bill hours after it passed the Republican-controlled Senate on Friday night, making it the sixth state in the nation to legalize same-sex marriage. Cuomo signed the bill into law after the legislature cleared the way to legalize same-sex marriage with a 33-29 vote, the first time a state Senate with a Republican majority has approved such a bill.

[Original post 11:21 p.m.] New York legislators cleared the last major hurdle to legalize same-sex marriage Friday when the state Senate followed the Assembly's lead in approving legislation to do so.

Earlier in the day, the Assembly passed a version of the bill that included an amendment about religious institutions. The Friday night vote in the Senate means the legislation's fate is now in the hands of Gov. Andrew Cuomo, who proposed it.

The Senate vote came after lawmakers agreed on an amendment that would help protect religious institutions from potential lawsuits, Senate Majority Leader Dean Skelos said.Demonstrators have gathered for days in Albany as state lawmakers pored over the details of the bill, which would help make New York the nation's sixth and largest state to legalize same-sex marriage.

The vote on the marriage measure, which the state Assembly passed June 15, was stalled in part by Republican concerns over protections for religious institutions against the potential for litigation.

Cuomo says the bill would grant same-sex couples equal rights to marry "as well as hundreds of rights, benefits and protections that are currently limited to married couples of the opposite sex."

The passage of same-sex marriage laws faced a daunting history in the New York state legislature.

The Senate rejected a bill to legalize same-sex marriage in 2009 and has blocked the last three attempts by the state's lower house to get the proposed legislation signed into law.

Tropical Storm Nepartak was sitting off the eastern coast of Japan on Monday night and is expected to make landfall‚Ätwitter.com/i/web/status/1‚Ä¶fs
cnni

5:30 pm ET July 26, 2021 RETWEET
Rather than helping alleviate isolation, virtual contact during the Covid-19 pandemic has been more likely to resul‚Ätwitter.com/i/web/status/1‚Ä¶NZ
cnni

5:00 pm ET July 26, 2021 RETWEET
Climate and infrastructure experts have been warning for years that London isn‚Äôt ready for climate change, with lartwitter.com/i/web/status/1‚Ä¶nZIz
cnni

5:00 pm ET July 26, 2021 RETWEET
This massive ridge of high pressure will continue to build over the US through the beginning of the week, prompting‚Ätwitter.com/i/web/status/1‚Ä¶wN
CNNweather