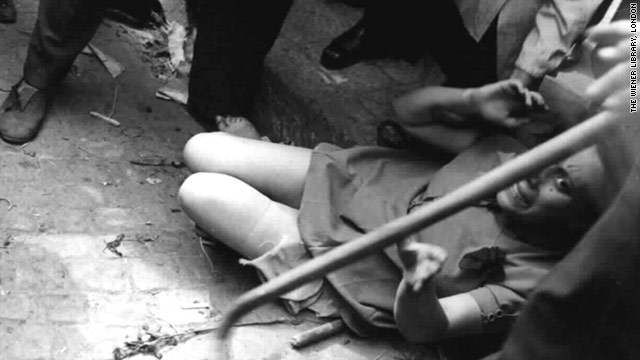 A pogrom in Lvov in 1941, where Ukrainian Nazi collaborators ransacked the city while abusing and murdering Jews
June 24th, 2011
05:32 PM ET

Overheard on CNN.com: How relevant are new stories about the Holocaust?

"If one ever wants to see humanity's real face, just read the comments on any CNN story concerning a particular religion or background."–TheFinalWerd

Silence lifted: The untold stories of rape during the Holocaust

Was sexual violence more common during the Holocaust than originally believed? Were victims and their families too ashamed or too traumatized to report it, even when able to talk about other atrocities? The story had CNN.com readers arguing over the relevance of new stories on a 65-year-old genocide.

DanUSMC said, "My first response to this was to question why they keep bringing this up, and why do we need to see this? But to be honest, we need to be reminded of how pervasive this really was. It was not a couple of people doing this, it involved tens of thousands, if not hundreds of thousands of troops–previously good people somehow turned into careless murderers."

doors43 said, "Picture # 3 had me crying, seeing all those babies and little girls forced naked before death with their mothers. I think of my own 7-year-old daughter and am sickened at how scared she would be if this happened to me and her, knowing I couldn't do my job as a mother and protect her. I'm ashamed this is part of humanity's history. And no, I'm not Jewish, Israeli or German."

1racebannon said, "The Nazi regime shows us that there is almost no limit to the evil that can be perpetrated upon fellow human beings when your ideology is grounded in racism and hatred. It's not pretty, but it shouldn't be swept under the rug either."

pgrenader said, "The only Holocaust story which is newsworthy is the current BS of those who insist it didn't occur, which can be likened to blasphemy as far as I am concerned."

abm2009Â said, "I am an American-born Jew: Never been to Israel, didn't lose any relatives in the Holocaust, and I'm not very religious. The Holocaust did happen, and anyone who thinks otherwise is a fool - seriously, what do you gain by denying it? Also, I think we need to remind ourselves of the Holocaust so that it doesn't happen again. But I, too, am tired of the victimhood. I'm tired of Jews being perceived as victims and wanting to be perceived as victims. There are other Holocaust stories, one where Jews fought back. I want the Jewish narrative to change."

Why don't you write about other genocides? asked some CNN.com readers. worldiscrazy said, "I feel bad for the victims, but the topic of Holocaust has been brought up a gazillion times in the past. People don't bring up Vietnam War or Nanking Massacre anymore. They're all atrocious, but there is a point in life when bringing up these issues repeatedly causes more pain than closure."

Chinny1 said, "Yes, violence against women in this capacity is appalling. But this was approximately 60 years ago. Relatively few people from that generation are still alive. Can't we just focus on present-day victims of violence in Saudi Arabia, Iran, Pakistan, Africa, etc.? Let's not neglect the present."

shnawky1 asked, "Did you miss the links to FOUR stories on present-day atrocities embedded within the story or did you just read the headline?"

The Republican-led House of Representatives rejected a bill Friday restricting funding for the NATO-led Libyan offensive; earlier, they rejected a resolution supporting the same offensive. Like House members, CNN.com readers seemed conflicted over Libya. LightnUp said, "I don't understand the GOP perspective on this one." maybrick said, "Republicans were all complaining that Obama waited too long to deal with Libya and then when he did something about it they complained about the cost. You just can't please some people."

JJNOLA said, "Come on, Republicans. You're making it very hard to read you. You usually love this invasion stuff. Why the hesitation? We can let you stand in front of the 'Mission Accomplished' banner again."

JulieWorth said, "Whatever the hypocritical reason they've become pacifists, don't go in the opposite direction and become a warmonger just because Obama made a bad political decision."

NewYorkah said, "As far as I can tell, Democrats only like war when their president starts it, even if he didn't follow proper procedure." pgrenaderÂ said, "Hey 'New Yorkah'–BaaaastonÂ here and you're full of it. You show me one photograph of one U.S. combat officer on Libyan soil and I'll show you a violation of the War Powers Act. Until then, get your facts straight and cool it with the ridiculous compartmental bias."

krusty2p said, "I'm not anti-Obama, but I don't think that just because U.S. soldiers are not there or being killed makes this anything else than going to war."

JMW77 said, "We just need to get out of these wars and stop trying to be the police of the world."

10 exercise myths that won't go away

If you thought stretching before exercising would reduce injury, you were wrong, studies show. Also, you can nix the idea of spot reducing for toned arms. Oh, and forget the protein shake. Exercise gurus weighed in on what myths they hated most. The mythbusting had many readers talking about stretching.

enver2 said, "This is exactly the kind of pseudo-scientific 'gee whiz!' reporting that leads so many people astray. No. 1 in particular is madness. Hey everyone, stop stretching! What great advice!"

disgustedNY said, "I run a lot and I can tell you for sure that No. 1 is incorrect! I am 46 and if I don't stretch my leg muscles I can get nasty cramps."

mosspohÂ said, "Your sample size of oneÂ does not make it incorrect. Static stretching is not that useful. Cramps tend to be the result of electrolyte imbalances. The best warmup is dynamic stretching, i.e. a light jog, some lunges, pushups, etc. until you have a nice sweat built up. That is data-supported. Stretching can actually result in strength reduction if done BEFORE lifting weights."

Las730 said, "Well when you get 'old,' exercising can cause your joints to be stiff after cardio. Stretching sure relieves that!"

Hoeech That may be true in your case and in many others, but a cramp technically isn't an injury: It's when the muscle spasms momentarily due to high sudden demands placed on it. Stretching has its value, but it won't prevent torn ligaments and sprains.

pappakap said, "Stretching is no good? What about yoga?"
scot4875 said, "There's a lot more to yoga than just stretching. Yoga also requires a lot of balance and strength."

larry051967 said, "I have been running for too many years to count and I and my friends always warm up with some easy running and break a sweat, then stretch just a little and really slow and easy. We concentrate most of our stretching after a run and then we still do it gently and don't make a big deal out of it. Many times the stretching is just skipped and I've never had a serious injury even with 100-mile weeks when I was younger."

Scientists and fire crews with the National Park Service have discovered a smoldering Sequoia tree that is still buâ€twitter.com/i/web/status/1â€¦TE
CNNweather

3:08 pm ET May 7, 2021 RETWEET
Mother's Day plans will be impacted by the weather this weekend as severe storms and rain threaten the central US aâ€twitter.com/i/web/status/1â€¦Vn
CNNweather

1:37 pm ET May 7, 2021 RETWEET
Space debris from a Chinese rocket could crash into Earth less than 24 hours from now, but where it hits is still uâ€twitter.com/i/web/status/1â€¦3N
CNNweather

11:26 am ET May 7, 2021 RETWEET
China's annual emissions exceeded those of all developed nations combined in 2019, the first time this has happenedâ€twitter.com/i/web/status/1â€¦K9
CNNweather

9:03 am ET May 7, 2021 RETWEET
Two new studies agree that ice melt is a threat to coastlines around the world, but they come to different conclusiâ€twitter.com/i/web/status/1â€¦lC
CNNweather