The CDC recommends Covid-19 vaccine boosters for older and high risk Americans, including those whose jobs put themŌĆtwitter.com/i/web/status/1ŌĆ”Za

An Illinois coroner has identified a body found earlier this month as missing graduate student Jelani Day, who wasŌĆtwitter.com/i/web/status/1ŌĆ”ES

Texas abortion providers have asked the Supreme Court to expedite a review of the state law that bars abortions aftŌĆtwitter.com/i/web/status/1ŌĆ”Nu

At least one person was killed and multiple others were injured after a shooting at a Kroger. The shooter is also dŌĆtwitter.com/i/web/status/1ŌĆ”xC 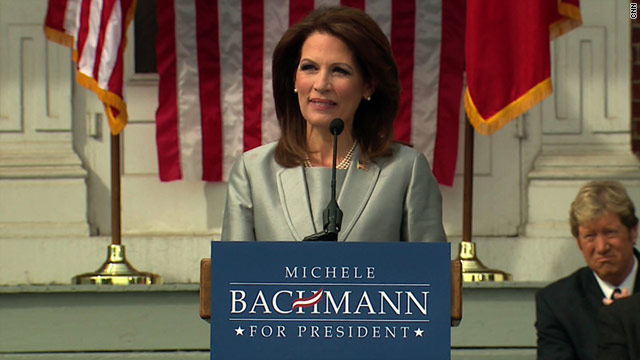 Minnesota Rep. Michele Bachmann formally announced her candidacy for the 2012 Republican presidential nomination Monday during an appearance in Waterloo, Iowa, a city where she was born. Stay tuned for developments in this breaking story.

The announcement comes a day after Fox anchor Chris Wallace apologized to her for asking Bachmann whether she is a "flake" on Fox News Sunday.

Who is Michele Bachmann?

Wallace wrote on his website: "A lot of you were more than perturbed, you were upset and felt that I had been rude to her. And since in the end it's really all about the answers and not about the questions, I messed up, I'm sorry. I didn't mean any disrespect."

When asked on ABC about the newsman's apology, Bachmann said it is "insulting to insinuate that a candidate for president is less than serious."

The CDC recommends Covid-19 vaccine boosters for older and high risk Americans, including those whose jobs put themŌĆtwitter.com/i/web/status/1ŌĆ”0r
cnni

2:48 am ET September 24, 2021 RETWEET
From helmets with horns to shirts with players names spelled on the front, the Ryder Cup has brought out some eclecŌĆtwitter.com/i/web/status/1ŌĆ”Zu
cnni

1:35 am ET September 24, 2021 RETWEET
US Secretary of State Antony Blinken defended US leadership at the United Nations on Thursday even as he acknowledgŌĆtwitter.com/i/web/status/1ŌĆ”H2
cnni