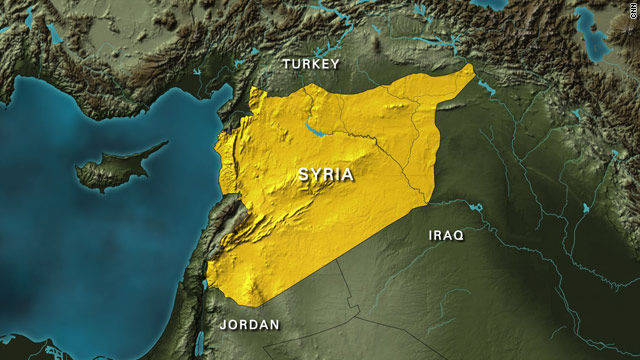 At town Syrians fled, government gives its side of story

Editor's note: CNN's Arwa Damon is reporting from Syria, where violence has prompted hundreds of people to flee to Turkey. Critics of the Syrian government accuse it of killing unarmed demonstrators; the government blames what it says are armed gangs bent on establishing an Islamic caliphate. This is a post that Damon filed Tuesday from Jisr al-Shougour, a Syrian town where some refugees are from.

We had just passed the "Homs 40km" sign when we saw the first tanks stationed along the Damascus-Aleppo highway and the sandbagged fighting positions. The closer we got to the town of Jisr al-Shoughour, the more the Syrian landscape reminded me of a military zone.

Stuffed in each vehicle in our government convoy were members of the media, official escorts and drivers packing AK-47s. By the time we were heading into downtown Jisr al-Shoughour, we'd also picked up two truckloads of soldiers, all apparently for our protection.

We are told that the foreign-backed armed gangs the government blames for the violence still pose a threat.

For weeks we had been reporting on the government crackdown from the Syria-Turkey border. We listened to harrowing stories from refugees who fled Jisr al-Shoughour and surrounding villages with just the clothes on their backs, convinced that should they have stayed, they would have been at the mercy of the full wrath of the Syrian military. Crouched under makeshift tents or crammed into refugee camps, they told of Syrian security forces indiscriminately opening fire on demonstrators, mass arrests and killings.

The conversations echoed in my mind - the tremors of terror in their voices, the fear I had seen in their eyes - as we drove through the town so many of them once called home.

Most of the shops were shut. A handful of people were milling around.

At a briefing during our trip, a military official said thousands of gunmen had taken control of Jisr al-Shougour. Their aim was to establish an al-Qaeda style Islamic caliphate, the official said.

According to the government, the military invasion that followed was sparked by a massacre of security forces. Most of the more than 100 bodies, it said, were mutilated and tossed into mass graves.

This account is fiercely disputed by activists who said the deaths came after a mutiny within the security forces, with clashes between regime loyalists and those who refused to fire on demonstrators.

The military said that when it arrived, it found the town largely deserted, and that the gunmen mostly fled into the hills. Hundreds of the gunmen, the government said, went with their families to the refugee camps in Turkey.

In front of Jisr al-Shoughour's burnt-out and damaged courthouse, a government-provided witness, Abdul Rahman Najid, pointed to the shop he owns across the street and gestured elaborately as he described how armed men intermingled with the demonstrators who marched down the main street.

"They had their guns hidden," he said. "And they had grenades and cars with RPGs."

He said when gunfire erupted, he ran with hundreds of others and hid behind a wall. The gunmen killed eight security force members who were holed up in a post office and trying to surrender, he said.

We were then taken to a place where the government says more than 100 Syrian security force personnel were slaughtered.

Another government-provided eyewitness described how the compound was littered with bodies. In one corner, he showed us where he said three of the bodies - one of which was decapitated - were found.

But when I approached a group of men in the street at random, half of them walked away. I tried to stop one of them, asking if I could talk to him. But the elderly man muttered, "I don't know anything" and disappeared around the corner. Others melted away as well. Those left behind appeared uncomfortable, nudging each other to respond to basic questions.

Getting independent firsthand accounts of what happened here is nearly impossible.

Our last stop was the market where initially our government escorts said we would be at liberty to move around as we pleased. But they continued to shadow us and stayed well within earshot of our conversations.

A group of children broke into pro-regime chants.

"God, Syria, and only Bashar!"

"Where did you learn that?" I asked them.

"On TV," they responded.

The kids said they returned to Jisr al-Shougour around a week ago.

"Why did you leave?"

There was initial silence. Then one piped up with "armed gangs" before the group dissolved into giggles.