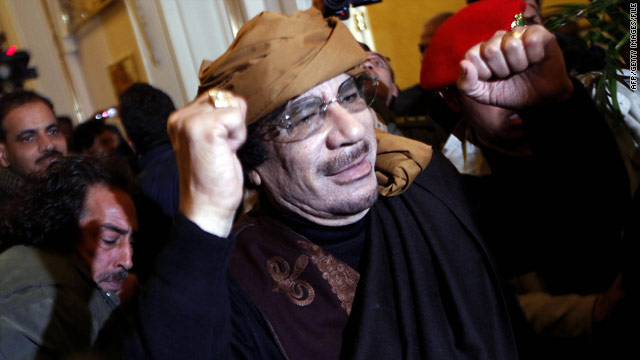 The International Criminal Court has issued an arrest warrant for Libyan leader Moammar Gadhafi, as well as for his son and brother-in-law.
June 28th, 2011
08:14 AM ET

The International Criminal Court is still trying to link Libyan leader Moammar Gadhafi, his son and his brother-in-law to rapes but it does not yet have enough evidence to do so, prosecutor Luis Moreno-Ocampo said Tuesday.

It has evidence that rapes have taken place in Libya's civil war, but he cannot prove Gadhafi ordered them, he said.

Learn about Eman al Obeidy, a Libyan woman who says she was gang-raped earlier this year by Gadhafi's militiamen. Her story is among several reported by human rights organizations working in and near Libya.

The International Criminal Court issued arrest warrants Monday for Gadhafi, his son Saif al-Islam Gadhafi, and his brother-in-law Abdullah al-Sanussi on other charges.

Saif Al-Islam Gadhafi is a close adviser to his father. His arrest warrant came two days after his 39th birthday. Al-Sanussi serves as Gadhafi's head of intelligence.

The warrants are "for crimes against humanity," including murder and persecution, "allegedly committed across Libya" from February 15 through "at least" February 28, "through the state apparatus and security forces," the court said in a news release.

The court could file charges against "one or two other names, but in principle the first investigation focuses on these individuals," Moreno-Ocampo said Tuesday.

The court is not asking international forces operating in Libya to arrest the suspects, Moreno-Ocampo said, explaining that Libya has the primary responsibility to do so as a United Nations member.

And he insisted it was only a matter of time until Gadhafi was arrested, pointing out that Bosnian Serb war crimes suspect Ratko Mladic was finally seized more than 15 years after a warrant for his arrest was issued.

"The arrest warrants are not going away," he said, noting that 161 warrants had been issued in connection with the Yugoslav wars of the early 1990s - and that 160 suspects have been seized.

Rape has been used as a tool of war since antiquity. Last week, CNN.com told the stories of Holocaust survivors who say they were raped in the concentration camps. Many other stories of sexual assault are chronicled by a small fraternity of professional interviewers who do their job in war zones throughout the globe.

Learn the latest in the unrest in the Middle East, country by county.