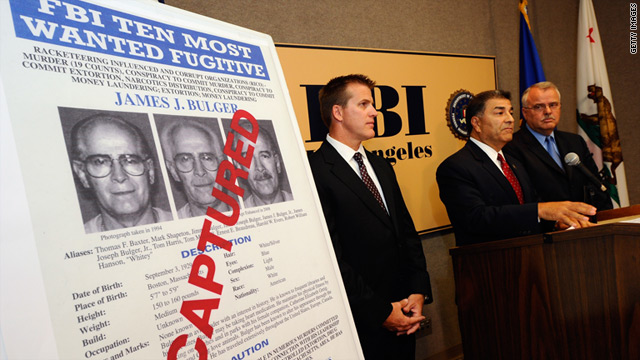 On the Radar: Mobster in court, wildfire in New Mexico, Giffords in Texas

Bulger goes to court - A hearing for reputed mob boss James "Whitey" Bulger is expected Tuesday afternoon in Boston. A federal judge will decide if Bulger can afford to pay for his own attorney. The U.S. attorney's office in Boston is challenging the notion that the federal government can pick up his legal tab. Investigators say they found more than $800,000 in cash hidden in the walls of his home when they arrested Bulger last week in Southern California.

New Mexico wildfire - A blaze is creeping close to the Los Alamos National Laboratory in New Mexico, which will remained closed Tuesday. ThousandsÂ  of people who live nearby are being evacuated. Officials said all nuclear and hazardous materials at Los Alamos are protected. The lab in Los Alamos, a center of American nuclear science, is one of the nation's top national-security research facilities.

Obama cites progress in debt ceiling talks - President Barack Obama believes "a significant deal" on reducing America's debt is possible this year as long as Republicans are willing to accept no one will get everything they want in negotiations, White House press secretary Jay Carney said Monday. The president met with Senate leaders from both parties Monday, and talks are continuing. Congress faces an August 2 deadline to raise the nation's debt ceiling, and pressure is mounting to reach a deal to prevent market jitters and the corresponding harm to the fragile economic recovery.

Public outing for Giffords - U.S. Rep. Gabrielle Giffords of Arizona keeps showing signs of improving health months after a gunman shot her in the head at a political event in January. Giffords joined her husband, astronaut Mark Kelly, at a NASA event Monday night in Houston. The congresswoman was released from the hospital June 15.

Rory McIlroy was in tears after beating Xander Schauffele in their Ryder Cup singles match on Sunday, saying he "shâ€twitter.com/i/web/status/1â€¦tU
cnni