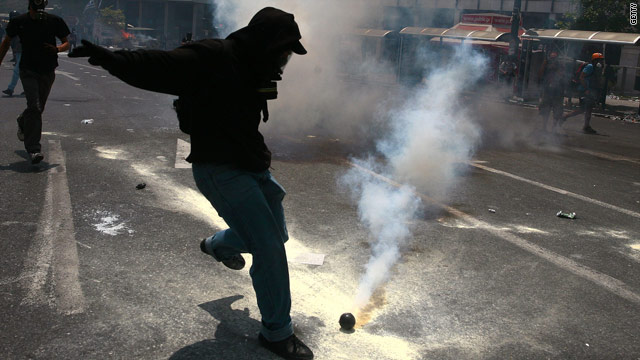 A protestor kicks a tear gas canister during clashes with riot police during a 48-hour general strike in Athens.
June 28th, 2011
12:33 PM ET

Violence in the streets of Athens

About 3,000 Greek riot police faced off against demonstrators in Athens as thousands marched to protest proposed austerity measures on the first day of Greece's two-day strike.

Most of the clashes are outside the Greek Parliament building in the center of the country's capital, where lawmakers are set to vote Wednesday on a tough five-year package of tax increases and spending cuts. European Council President Herman van Rompuy urged them to pass the measures to help ease Greece's serious financial problems.

"There are decisive moments and the coming hours will be decisive, crucial for the Greek people, but also for the Eurozone and the stability of the world economy," he told the European Parliament in Brussels on Tuesday. Read developments in this story and more about how Greece's money woes are affecting its relationship with the EU and economies throughout the world.