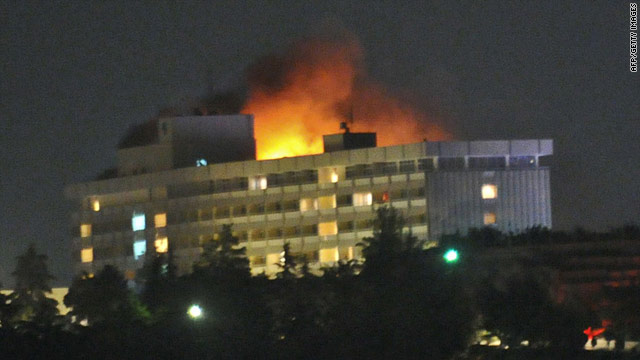 On the Radar: Kabul hotel attack, wildfire near nuclear lab, teens and drugs

Kabul hotel attack - Eight suicide attackers and 10 others were killed in an attack at a Kabul hotel popular with Westerners, journalists and politicians. President Hamid Karzai said Thursday that the attack at the Inter-Continental won't interrupt the power handoverÂ from international troops to Afghan forces. Police say the number of dead may go up as they continue to search the hotel. One guest, a student, began to write his will inside his room while he heard shooting and explosions outside his room, because people he contacted outside the hotel told him it was safer if he stayed put. The Taliban has claimed responsibility for the carnage. Stay with CNN.com for developments in this story, and check out CNN.com's Afghanistan Crossroads blog which focuses on life in Afghanistan.

Wildfire near nuclear lab - The wildfire near Santa Fe, New Mexico, is within miles of the Los Alamos National Laboratory, so the facility will remain closed at least through Thursday. Officials say the nuclear and hazardous materials at the lab are safe.

First presser since March at White House - President Barack Obama will hold his first news conference since March on Wednesday. He's expected to field questions about Afghanistan, American involvement in Libya, and the United States economy. He's also expected to address the debt ceiling crisis and present his position that the federal government should be allowed to borrow more money.

Teen drug use big problem - A new study from the National Center on Addiction and Substance Abuse finds 90% of people who become addicted started smoking, drinking or using other drugs before the age of 18. Columbia University, which published the study, is calling it America's top health problem.

Drugmaker AstraZeneca will resume the trial of its experimental coronavirus vaccine in the United States, which hasâ€twitter.com/i/web/status/1â€¦SN
cnni

4:08 pm ET October 23, 2020 RETWEET
If you thought giant "murder hornets" had disappeared because they dropped from the headlines, you are mistaken. Eâ€twitter.com/i/web/status/1â€¦un
cnni