The Cleveland Indians are changing their name next season to the Cleveland Guardians, the MLB club says cnn.it/3y2nFVh

NFL warns Covid outbreaks among unvaccinated players or staff could lead to game forfeits and monetary losses for tâ€twitter.com/i/web/status/1â€¦me 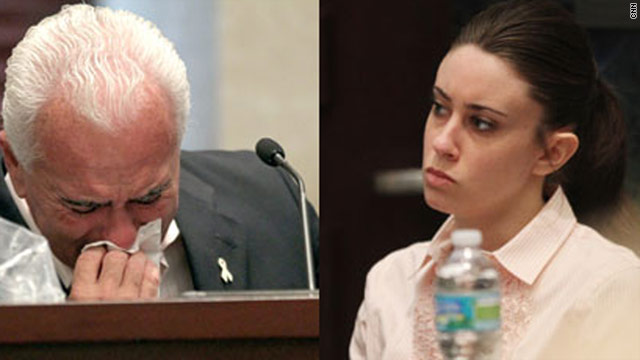 Casey Anthony's defense rested its case Thursday without calling her to the stand in the capital murder trial.

Orange County Chief Judge Belvin Perry Jr. questioned her to make sure the decision not to testify was hers, to which she responded, "Yes sir."

Anthony's defense team is trying to discredit the prosecution theory that the Orlando woman rendered her daughter Caylee unconscious with chloroform, duct-taped her mouth and nose, and stored the child's body in her car trunk for a few days before dumping it in the woods.

Caylee was last seen June 16, 2008, although she was not reported missing until 31 days later, on July 15. The little girl's skeletal remains were found in December of the same year near the Anthony home, with duct tape still attached to the mouth portion.

In a bizarre moment caught on tape by a local TV camera and posted on Youtube, an apparent trial spectator, identified as Matthew Bartlett, was found to be in contempt of court after seemingly flipping the bird at prosecutor Jeff Ashton, in violation of a sign posted saying gestures would not be allowed.

"I'm truly sorry for doing this," Bartlett said. "This is something stupid. I'm not sure why I even did it. I just apologize."

He was sentenced to six days in jail and fined $400 plus $223 in court costs, giving him six months to pay the fine. Bartlett was handcuffed and taken to jail by Orange County deputies.

Lebanon's water supply system is on the verge of total collapse, according to the United Nations Children's Fund cnn.it/3hYjELT
cnni

1:44 pm ET July 23, 2021 RETWEET
The French power company that co-owns a nuclear plant in China would shut it down if it could, due to damage to theâ€twitter.com/i/web/status/1â€¦9T
cnni

1:28 pm ET July 23, 2021 RETWEET
Could the climate crisis mean the end of meat? Join CNNâ€™s Bill Weir on a journey to see how innovation could bringtwitter.com/i/web/status/1â€¦xb9h
CNNweather