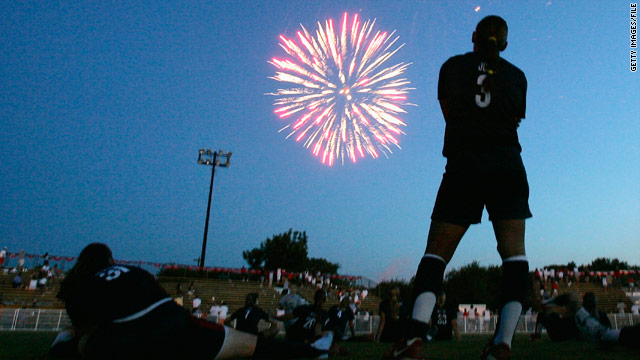 Team USA softball players watch fireworks last year in Fort Worth, Texas, which is going ahead with its show this year.
June 30th, 2011
02:40 PM ET

Fourth of July to be smaller in Texas

The stars at night are still big and bright, deep in the heart of Texas, but you might have to search a bit to spot skyrockets among them this Fourth of July weekend.

Many cities and towns have canceled their Independence Day fireworks shows as the state endures a devastating drought. Authorities have prohibited open burning in 236 (or 93%) of the state's 254 counties.

"There's always risk involved, even though it may be minimal risk," said Alan B. Benson, fire chief in The Woodlands Township, located in the Piney Woods about 30 miles north of Houston. "But in this case, we really can't afford a mishap and take a chance on our forest. We're kind of a green community, so we really value that resource."

He decided Monday to cancel the suburb's show for the first time since 1975.

"The level of risk this year is simply not acceptable," Benson said. "We had about three days with approximately 30% chance of rain. Well, it didn't rain, and it's not going to. We believe it was a good decision."

Austin also canceled its display for the first time in 35 years. San Marcos decided to cancel its display Monday, leaving Kyle as the only central Texas city going ahead with fireworks, CNN affiliate KVUE reported.

Many communities have gone even further and banned private fireworks as part of their burn bans. In The Woodlands, violating the ban could mean a $1,000 fine or up to 180 days in jail.

Fireworks seller Chester Davis told the American-Statesman newspaper in Austin that he stands to lose 30% of his business.

He said flashes and explosions are an essential part of celebrating our independence.

"It's what I believe America is all about," he told the Statesman. "It's apple pie, it's Chevrolet, and it's Fourth of July fireworks."

In the past seven days, the Texas Forest Service reports it has responded to 49 fires covering 19,216 acres.

Since fire season started on November 15, the Texas Forest Service and area fire departments have responded to 12,985 fires that have burned 3,268,011 acres, the agency reported.

Benson is holding out hope that significant rain will arrive in The Woodlands soon.

"We are contemplating having a blowout at the end of summer," he said. "Do it on Labor Day."

Research shows coronavirus can be spread not just by sneezes or coughs, but also simply by talking or possibly evenâ€twitter.com/i/web/status/1â€¦Uk
cnni

3:33 pm ET April 4, 2020 RETWEET
Campaigners who spoke to CNN are wracked with apprehension after a UK-wide consultation on changing the Gender Recoâ€twitter.com/i/web/status/1â€¦Bd
cnni

3:17 pm ET April 4, 2020 RETWEET
This 90-year-old is a wonderful example to us all. We talked to her after she survived #Coronavirus . She really crâ€twitter.com/i/web/status/1â€¦pI
sarasidnerCNN

3:13 pm ET April 4, 2020 RETWEET
In her video, this former ER nurse simulates going to the grocery store and she starts off by putting gloves on herâ€twitter.com/i/web/status/1â€¦kq
cnni