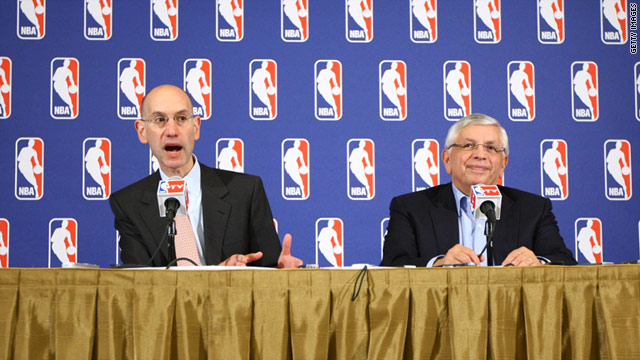 The NBA said Thursday it will recommend a lockout after the professional basketball league and players failed to reach a new collective bargaining agreement. The current agreement is set to expire at midnight tonight.

"What we told the union at the conclusion of today’s session was that we would recommend to our labor relations committee in a call later today that we lockout at the conclusion of this deal, which is at midnight tonight,” league Deputy Commissioner Adam Silver said Thursday at a press conference.

"Needless to say, we’re disappointed that this is where we find ourselves," Silver said.

In the collective bargaining agreement that is set to expire, players received 57% of basketball-related income. The NBA owners want to restructure the revenue-sharing agreement, which includes player salaries.

Union Executive Director Billy Hunter  has offered 54.3%  on the basis of projected growth over 10 years. But the league is losing money and the owners have basically offered a deal based on projected losses, Commissioner David Stern said.

During his tenure he has seen the average player salary go from $250,000 to $5 million, Stern said, “and I never felt that I had to apologize for the players” because the money was being generated by the system but now  "it’s time for there to be a return on the investment that’s being made."

Stern solemnly told of the side effects a league shutdown would cause to workers in NBA cities.

"It is with some sadness that we’re going to recommend this to the committee because a lockout has a very large impact on lot of people, many of whom are not associated with either side and there are a whole raft of people who make their living on our industry.”

Stern said there will be some changes to the way NBA teams will be expected to operate with a lockout in place.

The last time the league had a lockout was in 1998, which wiped out the first two months of the season.

A league also had a lockout in 1995 before the season started.

On Thursday, Stern said he expected the sides to try to set up a meeting some time next week, but he wasn't optimistic.

"There will be collateral damage as we go through the summer,” he said.