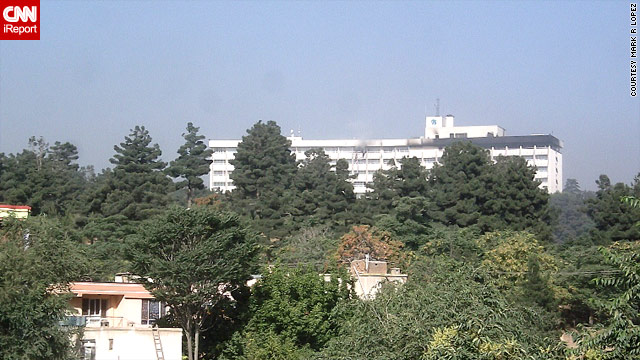 The Hotel Inter-Continental in Kabul, Afghanistan, was attacked Tuesday.
June 30th, 2011
08:17 AM ET

Kabul hotel attack - A man suspected of helping to organize this week's deadly hotel attack in Kabul was killed Thursday in an airstrike in southern Afghanistan, the International Security Assistance Force said. The Taliban claimed credit for the carnage at the Hotel Inter-Continental, a place which has long been popular with politicians, foreign journalists and Westerners.  The alleged terrorist is Ismail Jan, the deputy to the senior commander of Haqqani, a group linked to the Taliban. Jan was killed along with several other fighters, ISAF said.

American troops killed in Iraq - Three U.S. service members were killed Wednesday in southern Iraq, the U.S. military said. The military is not giving information about how they were killed. Their deaths happened around the same time Secretary of Defense Robert Gates released his final goodbye to the military.

Wisconsin teacher layoffs - The Milwaukee Public Schools are laying off more than 300 teachers. Their last day is Friday. The move is blamed on $84 million in state budget cuts and the system's efforts to control costs.  The layoffs could be repeated throughout the country as states slash funds for education, social services and local governments.

Tropical Storm Arlene - The first named storm of the 2011 Atlantic hurricane season made landfall on Mexico's eastern coast around 5 a.m. ET Thursday. It's moving at 9 mph with sustained winds of about 65 mph, slightly under hurricane status.  Forecasters warned of possible flash floods and mudslides.  On Wednesday, the storm caused heavy rains hundreds of miles away in Florida. News media there reported the drenching was a welcome respite from a long drought which has dropped water levels in the Everglades.